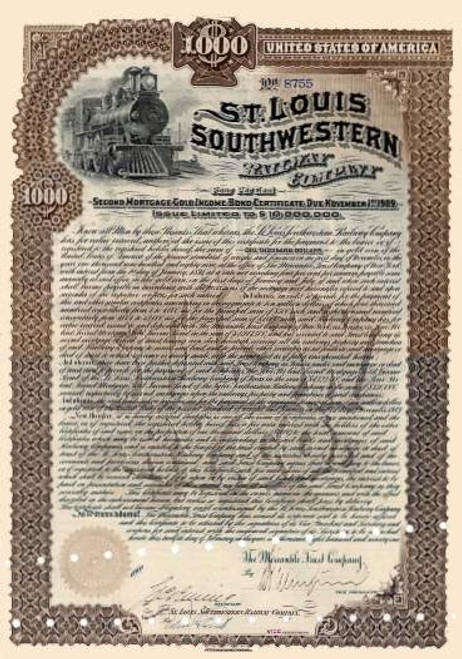 Beautifully engraved certificate from the St. Louis Southwestern Railway Company issued in 1891. This historic document was printed by the Franklin Banknote Company and has an ornate border around it with a vignette of a train. This item is hand signed by the Company's Vice President ( Edwin Gould ) and Secretary and is over 115 years old. 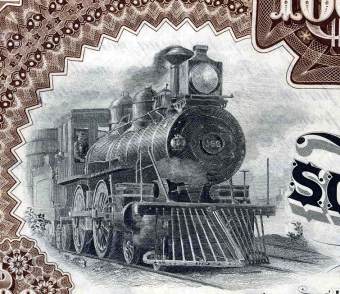 Certificate Vignette
The St. Louis Southwestern Railway Company was incorporated in Texas on January 12, 1891, and in Missouri on January 16, 1891. The company was chartered to acquire the properties formerly operated by the St. Louis, Arkansas and Texas Railway Company in Texas, which were sold under foreclosure on January 9, 1891. Including branch lines, on June 30, 1915, the system owned 1,542 miles of main track, of which 803 miles were in Texas. The St. Louis Southwestern also operated over an additional 230 miles via trackage rights. Members of the first board of directors included Louis Fitzgerald, Edwin Gould, and Winslow Pierce of New York; George Clark and C. M. Shelly of Waco; S. W. Fordyce of St. Louis; Tom Randolph of Sherman; J. A. Edson of Tyler; H. G. Fleming of Texarkana; and James Garrity of Corsicana. Edwin Gould The year 1898 saw the passing from actual participation in the business of the company, one of its most ardent. leaders. On October 31, Samuel Fordyce relinquished his office to Edwin Gould after a service record of approximately twenty years. Fordyce's resignation was due chiefly to his differences with George J. Gould, who demanded that Fordyce turn over the business of the Cotton Belt in Texas and Arkansas at junction points to his Texas roads and to the Missouri Pacific, regardless of pre-established rate agreements. After another disagreement over the defeat of a railroad commission in Arkansas, Fordyce tendered his resignation. Edwin Gould, second son of Jay Gould, was first connected with the road in 1888 as secretary, and was elected vice president in 1891 during the reorganization. He was born on February 26, 1866, and attended private schools until he became old enough to enter Columbia University, where, after three years, he decided that his interests were more in the commercial lines than in the literary. Despite his father s refusal to give him permission, he left college and turned to Wall Street, where in six months his operations showed a profit of one million dollars. In 1925 he sold control of the Cotton Belt to the Rock Island Railroad, which terminated the connection of the Gould family as railroad operators in this country after more than sixty-eight years of having controlling interest in one or more railroads. He turned his attention to helping establish homes and foundations for underprivileged children. The most noteworthy of these were the Edwin Gould Foundation for Children, the Hopewell Society of Brooklyn, and the Berkshire Industrial Farms at Canaan, New York. When the United States entered the first World War, he served first as supply sergeant of Troop A, Squadron A, and later as major in the ordnance department of the First Brigade.