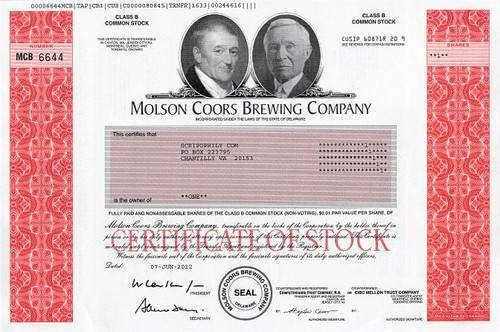 Beautifully engraved certificate from the Molson Coors Brewing Company. This historic document was printed by the American Banknote Company and has an ornate border around it with an image of the company's founders. This item has the printed signatures of the Company's President and Secretary.

Certificate Image
Molson Coors Brewing Company (TSX: TPX.B; NYSE: TAP) is a company that was created by the merger of two of North America's largest breweries: Molson of Canada, and Coors of the United States, on February 9, 2005. The Canadian subsidiary of Molson Coors Brewing Company is a part-owner of Brewers Retail Inc., operator of Ontario's The Beer Store retail chain. It is the world's seventh largest brewer by volume.