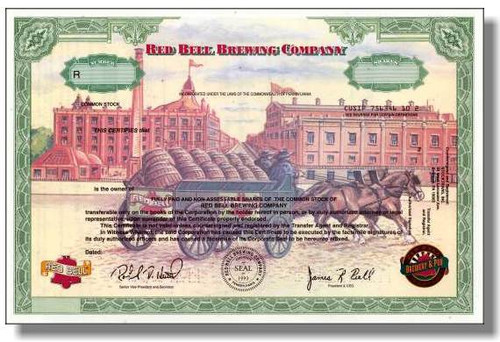 Beautifully engraved specimen certificate from the Red Bell Brewing Company . This historic document was printed by the Banknote Corporation of America and has an ornate border around it with vignettes of a horse drawn carriage carrying kegs of beer, the Red Bell logo, and the the Red Bell Brewery & Pub logo. This item has the printed signatures of the Company's President/CEO (James R. Bell ) and Senior Vice President/Secretary. Red Bell Brewing Company developed the first ever complete brewery operation and brewpub in a Professional Indoor Arena located at the First Union Center, home of the Philadelphia Flyers and 76ers. Red Bell also licenses its name to three brewpubs at Veterans Stadium, home to the Philadelphia Eagles and Phillies. On January 10, 2002, James R. Bell resigned as Chief Executive Officer, resident, and Chairman of the Board of Directors of the Company and is no longer an officer or employee. Martin F. Spellman was appointed to replace him as Chairman of the Board of Directors. Effective January 1, 2002, the company's brewery license was not renewed because they did not obtain the required tax clearance certificates from the Commonwealth of Pennsylvania taxing authorities because they owe taxes to the Commonwealth in the approximate amount of $80,000. As a result, they have not brewed beer at their main brewery or sold beer since that date. They are attempting to obtain the necessary tax clearance certificates from the taxing authorities and to renew our license. There can be no assurance that they will be able to do so, in which event they will not be able to brew beer at our main brewery or to sell beer. Notwithstanding the foregoing, their subsidiary, Red Bell Brewery & Pub Company, maintains a current brewery and restaurant license with the right to brew and sell beer at the micro brewery located at the First Union Center. The company's stock was bid at 2 Cents per share on January 22, 2002 down from $1.75 in May 2001. Red Bell Brewing Company produced ten styles of beer year round, marketed under distinct brand names. The Company's flagship brands are Philadelphia Original Lager and Philadelphia Traditional Irish Amber. The Company's other principal products include Philadelphia Black & Tan, Red Bell Cherry Stout, Philadelphia Original Light, Lemon Hill Wheat, American Pale Ale, Red Bell Heffe-Weizen, Ahopalypse Now (IPA), and Wee Heavy Scottish Ale. Red Bell markets its handcrafted ales and lagers through a third party independent distribution network. The Company sold beer in cases and kegs on a wholesale basis.