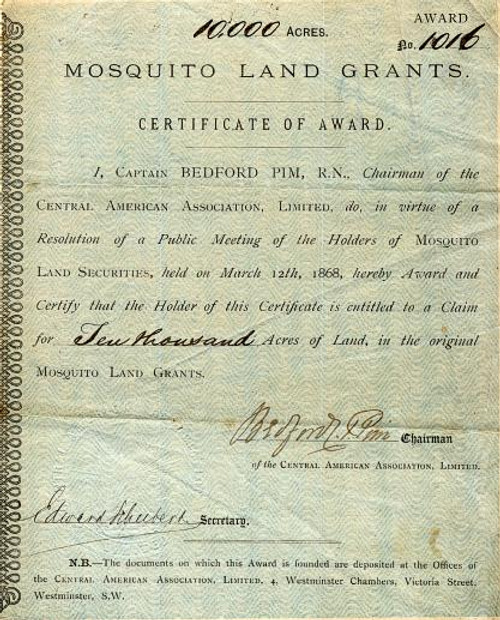 Beautiful Mosquito Land Grant from the Central America Association dated in 1868. This item has the signatures of the Company's Chairman, Bedford Clapperton Trevelyn Pim and Secretary and is over 139 years old. The Captain Bedford Pim, R.N., Chairman of the Central American Association....on March 12th, 1868 hereby award and certify the holder of this certificate is entitled to a claim for 10000 acres of land in the original Mosquito Land Grants. The documents on which this award is founded is deposited at the offices. ..4 Westminster Chambers, Victoria St, Westminster SW." Handsigned by Bedford Pim 1868 Bedford Clapperton Trevelyan Pim, British naval officer, born in Bideford, Devon, 12 June, 1826; died in London, 1 October, 1886. He was the only son of a captain in the British navy. He was educated at the Royal naval school, went to India in the merchant service, and on his return in 1842 was appointed a volunteer in the royal navy. He was employed for several years in the surveying service, made a voyage around the world in" the "Herald" in 1845-'51, and was engaged in the entire search for Sir John Franklin through Bering strait and Baffin bay. He saved the crew of the "Investigator," which had been frozen in for three years, and was the first man to make his way from a ship on the eastern side of the northwest passage to one on the western side. He was in active service in the Russian war, and in China, where he was wounded six times, He was made a commander, 19 April, 1858, visited the Isthmus of Suez, and studied the question of an interoceanic canal in 1859, was sent to the West Indies in command of the "Gorgon" in 1860, and employed on the coast of Central America to prevent filibustering attempts on the part of William Walker against Nicaragua. He retired on half-pay in 1861, visited Nicaragua in 1862 in company with Dr. Berthold Seemann, and devoted himself for several years to the project of interoceanic railway communication across that country and to the promotion of mining interests there. He was made a captain, 16 April, 1868, and was retired in April, 1870. He afterward studied law, was called to the bar of the Inner Temple, 27 January, 1873, elected to parliament as a Conservative in February, 1874, and retained his seat till 1880. At the time of his death he was the oldest arctic explorer. On the return of Lieutenant Adolphus W. Greely and his comrades from the polar regions, he tendered them a banquet in Montreal. He was a member of several scientific societies, proprietor of "The Navy," and author of "The Gate of the Pacific" (London, 1863) ; "Dottings on the Roadside in Panama, Nicaragua, and Mosquito," in conjunction with Dr. Berthold Seemann (1869) ; "The War Chronicle" (1873) ; "Essay on Feudal Tenure"; and various pamphlets and magazine articles. History from Wikipedia and OldCompanyResearch.com.