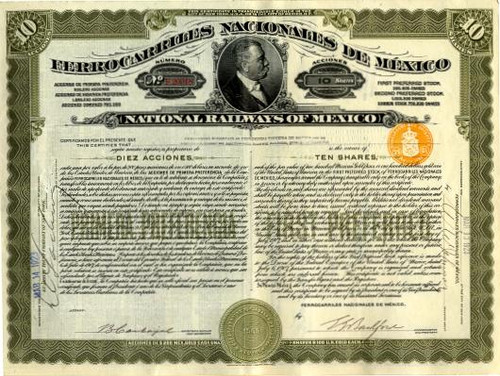 Beautifully engraved certificate from the Ferrocarriles Nacionales De Mexico issued no later than 1933. This historic document was printed by American Banknote Company and has an ornate border around it with a vignette of Porfirio DÃ­az. This item has the signatures of the Company's Vice-President and Secretary and is over 87 years old. 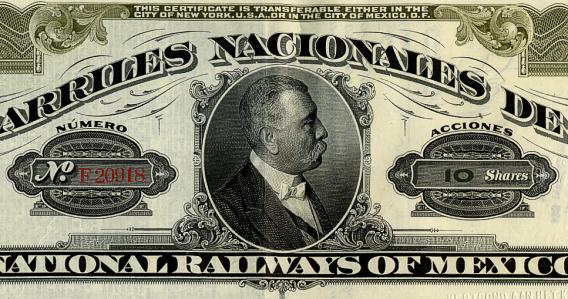 Certificate Vignette
The National Railways of Mexico was a corporation, the legal title being "Ferrocarriles Nacionales de Mexico," formed under a special Act of the Congress of Mexico in April, 1908. The purpose of the company was to carry ouf a readjustment plan for a combined ownership, under the control of the Mexican government, of the Mexican Central Railway Co., Limited, 3,528 miles; the National Railroad Co., of Mexico, 1,732 miles; the Interoceanic Railway Co.. of Mexico, 736 miles; the Mexican International Railroad Co., 918 miles and the Hidalgo & Northeastern Railway Co., 152 miles, a total of 7,066 miles. The plan was declared operative in 1908. The Mexican government acquired a majority of the entire capital stock. JosÃ© de la Cruz Porfirio DÃ­az Mori (September 15, 1830 2 July 1911) was a Mexican politician who would later become the President of Mexico from 1876 to 1880 and from 1884 to 1911, and one of the most controversial figures of the country.