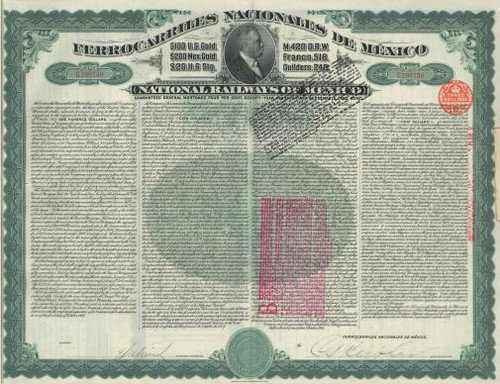 Beautifully engraved Gold Bond certificate from the Ferrocarriles Nacionales De Mexico issued in 1907. This historic document was printed by the American Banknote Company and has an ornate border around it with a vignette of Porfirio DÃ­az. This item is hand signed by the Company's Vice President and Assistant Secretary and is over 95 years old. 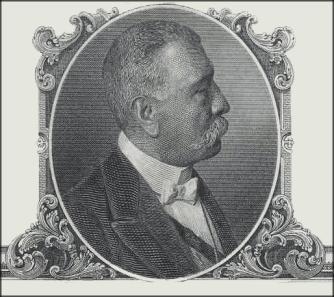 Certificate Vignette
History Ferrocarriles Nacionales de Mexico (FNM - National Railways of Mexico) was established in 1873. The Mexican government owned the rail network from 1937 until 1997 when it privatized the first of four railway regions. The Northeast Railway today is operated as Transportacion Ferroviaria Mexicana (TFM), a key component of Kansas City Southern's NAFTA Railway. TFM provides the primary rail route in Northern Mexico linking Mexico City with Laredo, Texas, where over 50 percent of U.S.-Mexico trade crosses the border. The line also connects major Mexico population centers in Monterrey and Guadalajara and the ports of Lazaro Cardenas, Veracruz and Tampico. Its 2,661-mile line accounts for 19 percent of rail in Mexico yet carries 40 percent of the country's total rail cargo. TFM, a joint venture between Transportacion Maritima Mexicana (TMM) and KCSI, became the owner of Mexico's Northeast Railway in December 1996 when it won the bid for the line and assumed operating control in June of 1997. The rail concession gives TFM the right to operate the line for 50 years with the option for renewal for another 50 years. The FNM privatization is one piece of Mexico's National Development Plan 1995-2000 which includes privatization of other government-owned-and-operated entities such as ports and utilities. Its goal is the development of a modern, efficient, and competitive railroad system to support a growing Mexican economy. JosÃ© de la Cruz Porfirio DÃ­az Mori (September 15, 1830 2 July 1911) was a Mexican politician who would later become the President of Mexico from 1876 to 1880 and from 1884 to 1911, and one of the most controversial figures of the country. History from Wikipedia and OldCompany.com (old stock certificate research service)