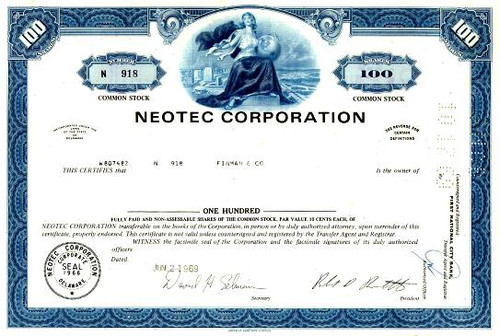 Beautifully engraved certificate from the Neotec Corporation issued in 1969-1970. This historic document was printed by the American Banknote Company and has an ornate border around it with a vignette of an allegorical woman holding a globe. This item has the printed signatures of the company's president and secretary and is over 31 years old. The history of NIRSystems is, in large part,the history of Near Infrared (NIR) technology for the past 30 years. The company traces its roots back to the NEOTEC Corporation , which was founded in 1966. NEOTEC introduced the first commercial NIR instrument in 1972, and other firsts include: The first computerized NIR instrument in 1974. The first on line NIR process analyzers in 1975. The first fiber optic NIR sampling system in 1978. The patent for the first continuously-scanning NIR spectrophotometer suitable for quantitative analysis, in 1978 Grain Quality Measurement NEOTEC's first commercial NIR analyzers were purchased by the Canadian Grain Commission to measure wheat quality at grain terminals in Thunder Bay, Vancouver, and Winnipeg. The instruments made use of technology developed by Karl Norris, a spectroscopist and research scientist at the USDA Agricultural Research Labs in Beltsville, Maryland. After NIR proved its value by rapidly measuring protein levels in wheat and barley, NIR analysis was quickly adopted for use in hunrdeds of grain elevators around the world. ForageTesting In 1981 the Pacific Scientific Corporation acquired NEOTEC, and expanded the company's focus into promising new areas for NIR -- industrial and forage applications. Shortly thereafter, two new instruments were introduced: The Pacific Scientific Model 6250 high-performance scanning grating instrument for industrial applications A filter based analyzer for agricultural feed and forage analysis To enhance its capability in forage analysis, the company acquired exclusive rights to the ISI forage analysis software developed by Dr. John Shenk of Pennsylvania State University. This strategic move helped the company become the leading supplier of feed and forage analysis systems. Industrial Uses In the late 1980's, NIR analysis became recognized by industry as a powerful quality control tool. This was due to three factors: Improved quantitative accuracy of the new scanning grating NIR technology Advances in the chemometrics software which analyzes NIR data The advent of the personal computer with high-speed math capabilities NIR analysis proved to be a time-saver and cost saver when used in place of slower conventional testing methods by industry. It gradually found widespread laboratory applications across a number of industries, including pharmaceuticals, polymers, chemicals, food processing, pulp paper, and more. A New Door to Process Measurement Pacific Scientific continued product development, and in 1989 introduced a new line of grating instruments under the trademark "NIRSystems". The modular design of the new instruments made possible interchangeable sampling accessories, as well as fiber optic interfaces which could adapt to laboratory and on line applications. This opened a new door for real time monitoring of chemical processes. In 1989 a Swedish instrument company, Perstorp Analytical bought the NIR operations of Pacific Scientific and gave it a new name NIRSystems, Inc. The new NIRSystems modular product line was introduced at the Pittsburgh Conference in March 1989, and the development of a range of pharmaceutical analyzers and on-line analyzer systems followed. All were based on the new modular spectrophotometer design. A Dedication to Quality In 1992, NIRSystems became only the third U.S. analytical instrument manufacturer to receive ISO 9002 Certification. The company continues to operate under a quality system that complies with the internationally recognized quality standards of the International Organization of Standards. In 1997 the company was sold once again, this time to the Danish instrument maker Foss Electric. Foss is the world's largest company in food and dairy analysis, and Foss NIRSystems instruments are marketed today for a wide variety of applications, including: food processing dairy processing agricultural trading and processing pharmaceutical processing chemical and polymer processing Foss NIRSystems, Inc. employs more than 100 people at its headquarters in Silver Spring, Maryland, U.S.A. Information of company was obtained from company website at http://www.foss-nirsystems.com/Cohist.htm.