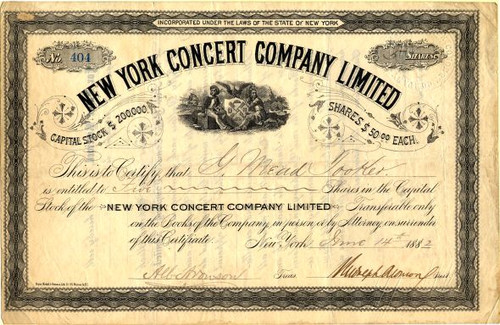 Beautiful certificate from the New York Concert Company Limited issued in 1882. This historic document was printed by Mayer, Merkel & Ottmann Litho Company and has an ornate border around it with a vignette of a native american, and eagle, a young boy, and a ship. This item has the signatures of the Company's President, Rudolph Aronson and Treasurer, Albert Aronson and is over 127 years old. 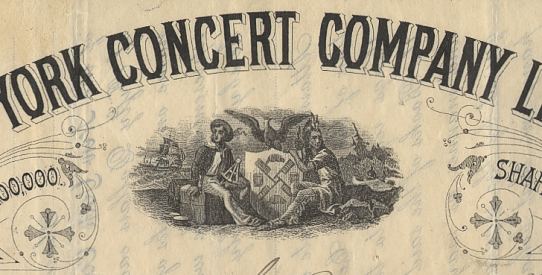 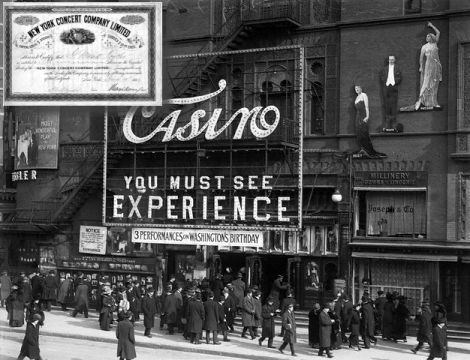 Old Photo Shown for Illustrative Purposes
Aronson, Rudolph (1856C1919), producer and composer. The New York Cborn entrepreneur conceived and built the Casino Theatre, which opened in 1882 as the first playhouse designed specifically for Broadway musicals. Initially with John A. McCaull and later alone, he produced many important turn of the century Continental operettas, giving Americans their first opportunity to hear in English works that were among the reigning hits of their era, some of which have remained popular ever since. He introduced most of Johann Strauss's best works, including The Queen's Lace Handkerchief (1882), Prince Methusalem (1883), Die Fledermaus (1885), The Gypsy Baron (1886), and Vienna Life (1901). However, his biggest success came with a now forgotten work, the British musical Erminie (1886). An accomplished musician, Aronson also composed and orchestrated the scores for several comic operas, notably The Rainmaker of Syria (1893). He eventually lost both the Casino and his producing organization, but to the end remained filled with grand plans, including an American Palace of Art, a sort of Lincoln or Kennedy Center, a half century ahead of its time. Autobiography: Theatrical and Musical Memoirs, 1913. The Casino Theatre was a New York City Broadway theatre from 1882 to 1930 in the United States of America. It was located at 1404 Broadway, at W. 39th Street. Managed by Canary & Lederer 1894-1903, and from 1903 by the Shuberts. The theatre was home to a number of long-running operettas. The Casino was demolished in 1930. The Casino is one of the picturesque buildings in New-York City. It stands on the southeast corner of Broadway and 39th Street, and is a fine illustration of the Arabesque or Moorish style of architecture. The materials are terra cotta, brick and sandstone. As viewed from the corner diagonally opposite, it presents a round tower, surmounted by a Moorish dome, at the street angle ; a curved overhanging gallery at the upper story on the 39th-Street side ; and an open colonnade, which rises above the roof on the broadway front. The dimensions of the building are 144 by 107 feet. The interior architecture corresponds with the exterior appearance. The auditorium, which is in the second story, and is reached by means of a wide marble stairway from a spacious lobby on the 39th- Street side, is decorated in plastic materials, of which asbestos forms a considerable part. Everywhere is seen the low horse-shoe arch, the serai-spherical dome, the low colonnade, and the lattice work, which are characteristic of Moorish architecture. The seating capacity is about 2,000. There are 16 boxes, a balcony, and (in place of the usual gallery) a buffet floor, virtually an open smoking-room, with the performance in view. The stage is 40 feet wide, and 32 feet deep. A feature of the Casino is its roof-garden, where in hot weather one may partake of refreshments, and listen to the orchestral music. The garden, tower and overhanging balcony are brilliantly lighted with electricity at night. The Casino was built and is owned by the New-York Concert Company, and was intended as a concert-hall, but from the outset until recently it has been a permanent home for comic opera. It was opened October 22, 1882, with a performance of The Queen's Lace Handkerchief. Its most famous production was that of Erminie, which in several runs has been performed upwards of 1,000 times. In the fall of 1892 the proprietors of the Casino abandoned the field of comic opera, rearranged the auditorium and stage of the house, and turned it into a concert-hall of the English type. The manager is Rudolph Aronson. History form the Kings Handbook of New York City By Moses King 1893 and OldCompany.com.