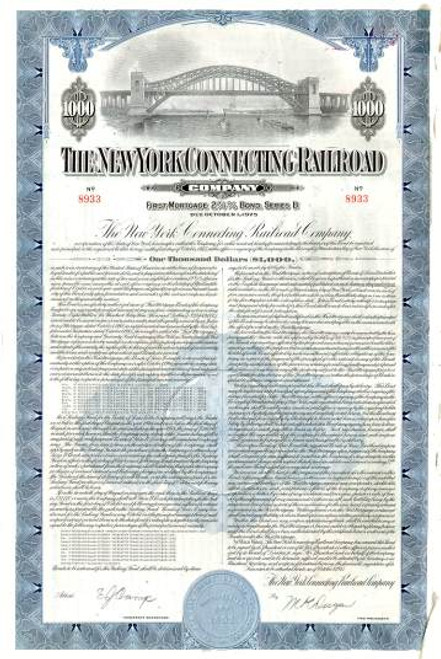 Beautifully engraved certificate from the New York Connecting Railroad Company issued in 1945. This historic document was printed by the American Banknote Company and has an ornate border around it with a vignette of various boats and ships traveling under bridges. This item is hand signed by the Company's President and Secretary and is over 56 years old.

In 1892, Oliver W. Barnes, an engineer associated with Pennsylvania Railroad president Alexander J. Cassatt and bridge designer Gustav Lindenthal, conceived plans for the Hell Gate Bridge. Cassatt saw the Hell Gate project - originally called the "East River Arch Bridge" - as an opportunity to bring rail traffic from Pennsylvania Railroad routes in New Jersey and points west through New York City to New England. The project was to also tie into the Long Island Rail Road routes, in which the Pennsylvania Railroad had a controlling interest. Meanwhile, Lindenthal saw the Hell Gate project as his chance to construct his Hudson River Bridge, a suspension bridge with a 2,800-foot-long main span that would have been the longest in the world. That same year, the New York Connecting Railroad was incorporated to help realize this plan. In 1904, Lindenthal, who oversaw the opening of the Williamsburg Bridge and the construction of the ongoing Manhattan Bridge and Queensboro Bridge projects, was chosen as consulting engineer and bridge architect by the Pennsylvania Railroad, which had just acquired the New York Connecting Railroad. Under these auspices, Lindenthal was engaged in a project to connect the tracks of the Pennsylvania Railroad in New Jersey, the Long Island Rail Road in Queens, and the New York, New Haven and Hartford Railroad in the Bronx. Although the project allowed Lindenthal to design the Hell Gate span, it would not include his long-sought goal: a great suspension bridge across the Hudson River. Instead, the Pennsylvania Railroad decided to use exclusive tunnels for rail traffic across the Hudson and East rivers. The Hell Gate Bridge over the East River in New York City is considered to be one of the world's most beautiful bridges. The crowning achievement of late 19th century bridge designer Gustav Lindenthal, the span also was the world's heaviest and longest steel arch bridge when completed in 1917. Hell Gate Bridge was the main element in a project that linked the Pennsylvania Railroad and the New York, New Haven and Hartford Railroad, allowing a direct route to New England. The bridge was constructed over Hell Gate, a narrow channel so named because of its turbulence. The waterway is 100 ft deep at midstream, with a tidal rise and fall of 6 ft and a high tidal velocity. The 1,017-ft bridge is a two-hinged steel arch with a clear span from center to center of skewback hinges of 977.6 ft. Built to accommodate four railroad tracks, it was designed for a total live and dead load of 76,000 lb per lineal foot. The arch's lower chord takes all of the compressive stress and the upper chord acts as the top chord of a stiffening truss. The bottom has a closed double-rectangular cross section with a uniform width of 6.5 ft and a depth varying from 7.5 ft at the crown to 11.5 ft at the skewbacks. The largest bottom chord piece has a cross sectional area of 1,385 sq in. (Engineering Record 6/27/14 p. 734). Hell Gate's turbulence--and the need to maintain marine traffic--made falsework out of the question. The bridge was erected by cantilevering from each pier the arms held in place by tiebacks. Late in 1915, hydraulic jacks lowered the two halves 22 in. to meet. They were only 5Â16-in. apart, an easy matter to deal with. Lindenthal's engineering achievement on Hell Gate was the latest in a string of noteworthy bridge designs. Among his other famous spans were the the 1,550-ft-long Sciotoville Bridge over the Ohio River, which was for 18 years the world's longest continuous truss; and Hell Gate's neighbor over the East River, the Queensboro Bridge. It is a five-span cantilever with a longest span of 1,182 ft. Lindenthal's two assistant chief engineers on Hell Gate would themselves go on to fame in the bridge design arena--Othmar H. Ammann and David B. Steinman. When it opened in 1916, the Hell Gate Bridge was the longest steel-arch bridge in the world. It would hold that title until the Bayonne Bridge opened in 1931. The Hell Gate Bridge, today has the 17th longest main steel arch span in the world, and continues to play a central role in rail transportation in the Northeast. Only three of the four tracks are used on the bridge. The two south tracks carry Amtrak Northeast Corridor trains, while the north inner track carries CSX and Norfolk Southern (the owners of the former Conrail routes) freight trains. The north outer track is no longer in operation. In the late 1980's and early 1990's, Senator Daniel Patrick Moynihan, who spent his childhood near the bridge in Astoria, lobbied to have the Hell Gate Bridge refurbished. While the nearby Triborough Bridge was constantly being maintained and repainted, the Hell Gate Bridge had not been painted since it opened in 1916, except by the skillful hands of graffiti artists. Since the bridge was deemed structurally sound by Amtrak president W. Graham Claytor, Jr., he saw little need for spending money for "cosmetic purposes." Buttressed by a 1991 article in The New Yorker on what Moynihan called "a great engineering miracle," Congress appropriated $55 million to repair and refurbish the Hell Gate Bridge. A unique color was even selected for the bridge paint: "Hell Gate Red." The refurbishing project was completed in the 1996. Much of the bridge history was obtain from the State of New York Website.