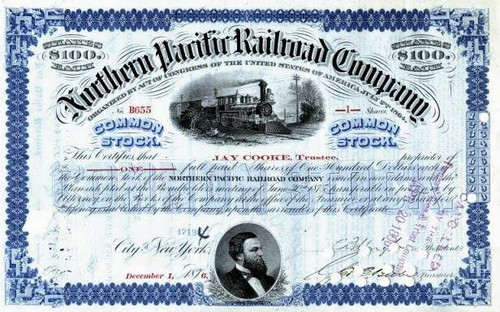 Beautifully engraved certificate from the Northern Pacific Railroad Company issued in 1876. This historic document was printed by the National Banknote Company and has an ornate border around it with a vignette of a train traveling in the countryside next to a telegraph line. This item is hand signed by the Company's President and Treasurer and is over 137 years old. It is also issued to and signed by Jay Cooke on the verso. 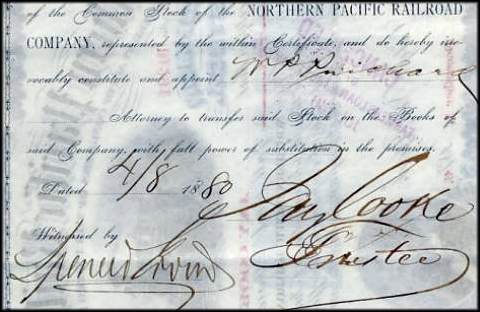 Signature of Jay Cooke on Back 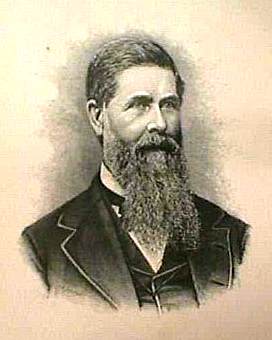 Jay Cooke
Jay Cooke (August 10, 1821-February 18, 1905), American financier, was born at Sandusky, Ohio, the son of Eleutheros Cooke (1787-1864), a pioneer Ohio lawyer, and Whig member of Congress from that state in 1831-1833. Seemingly destined for a commercial career, Jay Cooke received a preliminary training in a trading house in St. Louis, Missouri and in the booking office of a transportation company in Philadelphia, and at the age of eighteen entered the Philadelphia house of E.W. Clark & Company, one of the largest private banking firms in the country. Three years later he was admitted to membership in the firm, and before age 30 was also a partner in the New York City and St. Louis branches of the Clarks. In 1858 he retired from the firm, and for the next three years he devoted himself to reorganizing abandoned Pennsylvania railways and canals and placing them again in operation. On January 1, 1861 he opened the private banking house of Jay Cooke & Company in Philadelphia, and quickly floated a war loan of $3,000,000 for the state of Pennsylvania. In the early months of the American Civil War, Cooke cooperated with the secretary of the treasury, Salmon P. Chase, in securing loans from the leading bankers in the Northern cities, and his own firm was so successful in distributing treasury notes that Chase engaged him as special agent for the sale of the $500,000,000 of so-called "five-twenty" bonds authorized by Congress on February 25, 1862. The treasury department had previously failed in selling these bonds. Cooke secured the influence of the American press, appointed 2,500 sub-agents, and quickly sold $11,000,000 more of bonds than had been authorized. Congress immediately sanctioned the excess. At the same time, Cooke influenced the establishment of national banks, and organized a national bank at Washington and another at Philadelphia almost as quickly as Congress could authorize the institutions. In the early months of 1865, with the government facing pressing financial needs in the wake of disappointing sales of the new "seven-thirty" notes by the national banks, Cooke's services were again secured. He sent agents into remote villages and hamlets, and even into isolated mining camps in the west, and persuaded rural newspapers to praise the loan. Between February and July 1865 he disposed of three series of the notes, reaching a total of $830,000,000. This allowed the Union soldiers to be supplied and paid during the final months of the war. After the war, Cooke became interested in the development of the northwest, and in 1870 his firm financed the construction of the Northern Pacific railway. In advancing the money for the work, the firm overestimated its capital, and at the approach of the Panic of 1873 it was forced to suspend. Cooke himself was forced into bankruptcy. By 1880 Cooke had met all his financial obligations, and through an investment in a silver mine in Utah had again become wealthy. He died in Ogontz, Pennsylvania, on February 18, 1905. A devout Christian, Cooke regularly gave 10 percent of his income for religious and charitable purposes. After he had been forced to give up his Ogontz estate in bankruptcy, he later repurchased it and converted it into a school for girls. On July 2, 1864, President Abraham Lincoln signed an Act of Congress creating the Northern Pacific Railroad Company. It would have its eastern terminus at Lake Superior and its western terminus at Puget Sound. Much of its route was to follow the route of the famed 1804-1806 Lewis and Clark expedition across the unchartered West. Financing for the new railroad did not come about for several years, and it was not until 1870 that groundbreaking took place near Duluth, Minnesota. First stirrings of activity on the west end of the projected transcontinental began at about the same time. By 1883, only 300 miles remained between the two railheads. Jay Cooke at first managed the enterprise, but after the Panic of 1873 the railroad company went into bankruptcy. Under the leadership of Henry Villard, the Northern Pacific was opened in 1883 from Ashland, Wis., to Portland, Oreg. The company became the Northern Pacific Railway in 1896. In 1901 there was a spectacular financial contest between the interests of E. H. Harriman and those of James Hill and J. P. Morgan for control of the Northern Pacific. The Hill-Morgan group secured control, but an agreement between the two groups resulted in the organization of the Northern Securities Company, a giant holding company that controlled the Northern Pacific, the Great Northern, and the Chicago, Burlington & Quincy. When the trust was dissolved (1904) as a violation of the Sherman Antitrust Act, the Hill-Morgan interests came into control of the Northern Pacific. In spite of the breakup of the Northern Securities Company, a proposal for a very similar merger was made by a consultant for the Interstate Commerce Commission in 1921. The plan was never acted upon, but 40 years later the Northern Pacific again asked for permission to merge with the Great Northern and the Burlington lines. Finally, in 1970 the Supreme Court approved the consolidation. The merged company became the Burlington Northern Railroad, which in 1995 merged with the Santa Fe line to form the Burlington Northern Santa Fe Railway .