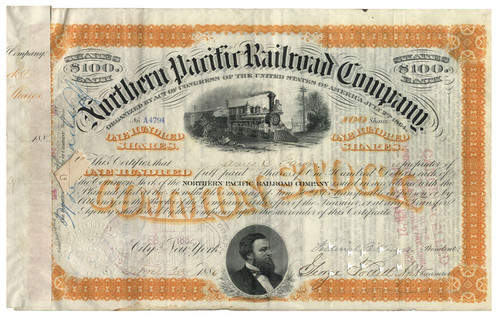 882, New York. Stock certificate for 100 shares. OrangeBlack. Engraved vignette of a steam locomotive at top center, nice portrait vignette of Frederick Billings at bottom. Issued to and signed on verso by JAMES C. FARGO (1829-1915). Expressman. Working along with his older brother, William, co-founder of the American Express Co., James became a prominent figure in the railroad and express industries. He became president of American Express in 1881 upon his brother's retirement from that position. Light punch and stamp cancellations not affecting Fargo's signature on verso. Very Fine. Cancellation: Punch cancelled 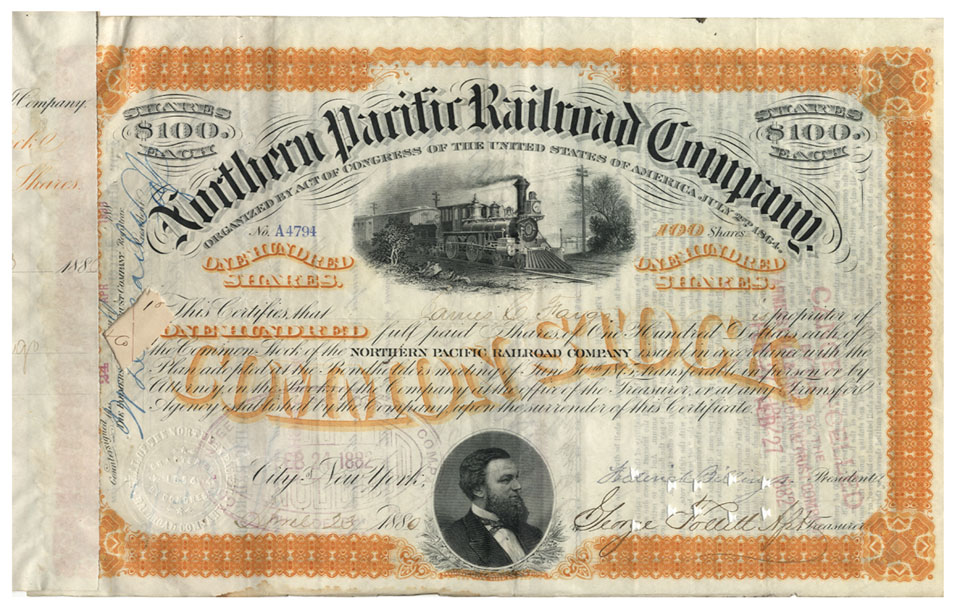 James C. Fargo's Signature
James Congdell Strong Fargo (May 5, 1829 February 8, 1915) was a president of the American Express Company. J. C. Fargo was born in Watervale, New York, a hamlet Onondaga County northeast of Pompey, New York. He was the seventh of eleven children born to William Congdell Fargo and Stacy Chappel Strong. Fargo attended public school. When he was fifteen, he moved to Buffalo, New York to work for his brother William Fargo, who was running express lines between Buffalo, Detroit, Michigan and Albany, New York. Originally a clerk, Fargo was eventually tasked with the delivery of money packages. In 1847, Fargo was granted control of operations in Detroit. Four years later, when the company was organized as Wells Fargo & Company, Fargo was named Superintendent of Virginia operations. In 1855, Fargo was appointed agent of Chicago, Illinois for the American Express Company, the successor to Wells, Fargo & Co. He was then promoted to General Superintendent of the Northwest Division for the company. He left for New York City, New York in 1867 to assume the position of General Manager of the American Express Company. He became the third president of American Express after William's death in 1881. James was also a co-founder, along with William Fargo, of American Express. He was succeeded as president in 1914 by George Chadbourne Taylor. Sometime between 1888 and 1890, J. C. Fargo took a trip to Europe and returned frustrated and infuriated. Despite the fact that he was president of American Express and that he carried with him traditional letters of credit, he found it difficult to obtain cash anywhere, except in major cities. Fargo went to Marcellus Flemming Berry and asked him to create a better solution than the traditional letter of credit. Berry, who had invented the express money order in 1882, created the American Express Traveler's Cheque, which was launched in 1891 in denominations of $10, $20, $50, and $100. History from Wikipedia and OldCompany.com (old stock certificate research service)