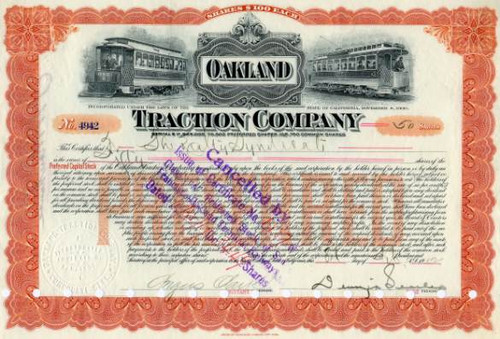 Beautifully engraved certificate from the Oakland Traction Company issued in 1912. This historic document was printed by the American Banknote Company and has an ornate border around it with a vignette of two trolley trains from the company. This item is hand signed by the Company's Vice President ( Dennis Searles ) and is over 94 years old.

Certificate Vignette
In 1873 John and Dennis Searles formed San Bernardino Borax Mining Company in what they called Searles Marsh or Searles Lake. Their mill produced 100 tons of borax per month. In 1895, Realty Syndicate was formed as a holding company, to begin consolidation of the local street railways in Oakland. In 1898, Realty Syndicate formed an operating company Oakland Transit Co., which would acquire the street railways. In 1902, Oakland Transit Co. was reorganized as Oakland Transit Consolidated Co., in 1904 as Oakland Traction Consolidated Co., and in 1906 as Oakland Traction Co. In 1912, Oakland Traction Co. was merged with the trans-bay San Francisco Oakland & San Jose Consolidated Railway, forming San Francisco-Oakland Terminal Railways. Although the local and the trans-bay systems continued to be operated separately. Sold in 1923 to Key System Transit Co., and sold in 1946 to National City Lines as subsidiary Key System Transit Lines. Acquired 1960 as publicly owned Alameda Contra Costa County Transit District.