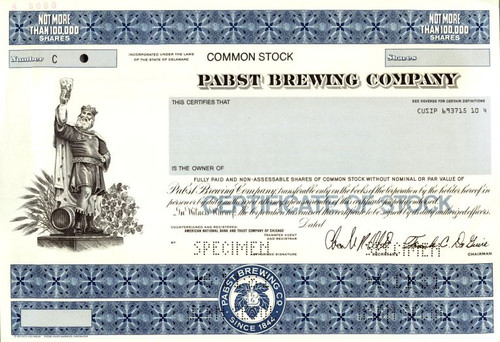 Beautiful engraved specimen certificate from the Pabst Brewing Company printed in 1981. This historic document was printed by United States Banknote Company and has an ornate border around it with a vignette of a King Gambrinus with a white cape holding a flagon of beer in his right hand. The figure wears black boots, a studded belt, and a crown. This item has the printed signatures of the Company's Chairman and Secretary and is over 34 years old. 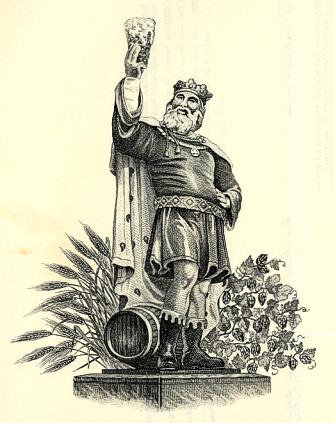 Certificate Vignette
The Pabst Brewing Company is an American company that dates its origins to a brewing company founded in 1844 by Jacob Best and by 1889 named after Frederick Pabst. It is currently the holding company contracting for the brewing of over two dozen brands of beer and malt liquor from defunct companies including P. Ballantine and Sons Brewing Company, G. Heileman Brewing Company, Lone Star Brewing Company, Pearl Brewing Company, Piels Bros., National Brewing Company, Olympia Brewing Company, Falstaff Brewing Corporation, Primo Brewing & Malting Company, Rainier Brewing Company, F & M Schaefer Brewing Company, Joseph Schlitz Brewing Company, Jacob Schmidt Brewing Company and Stroh Brewery Company. The company is also responsible for the brewing of Ice Man Malt Liquor, St. Ides High Gravity Malt Liquor, and retail versions of beers from McSorley's Old Ale House and Southampton Publick House (of Southampton, New York). Pabst is headquartered in Los Angeles, California. On November 13, 2014, Pabst announced that it had completed its sale to Blue Ribbon Intermediate Holdings, LLC. Blue Ribbon is a partnership between American beer entrepreneur Eugene Kashper and TSG Consumer Partners, a San Franciscobased private equity firm. Prior reports suggested the price agreed upon was around $700 million. About Specimens Specimen Certificates are actual certificates that have never been issued. They were usually kept by the printers in their permanent archives as their only example of a particular certificate. Sometimes you will see a hand stamp on the certificate that says "Do not remove from file". Specimens were also used to show prospective clients different types of certificate designs that were available. Specimen certificates are usually much scarcer than issued certificates. In fact, many times they are the only way to get a certificate for a particular company because the issued certificates were redeemed and destroyed. In a few instances, Specimen certificates we made for a company but were never used because a different design was chosen by the company. These certificates are normally stamped "Specimen" or they have small holes spelling the word specimen. Most of the time they don't have a serial number, or they have a serial number of 00000. This is an exciting sector of the hobby that grown in popularity over the past several years.