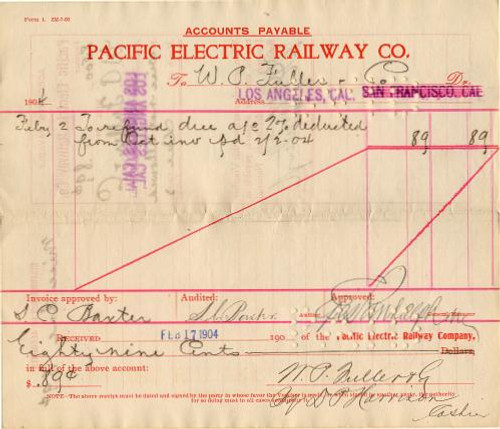 Accounts Payable voucher from the Pacific Electric Railway Co issued in 1904. This item has the signature of the Company's President, Henry Edwards Huntington and is over 103 years old. 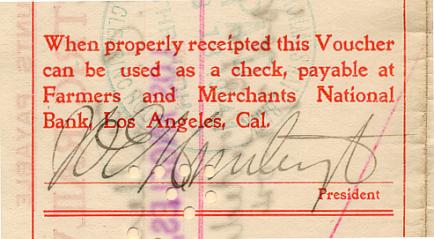 Henry Edwards Huntington signature on back of voucher
Henry Edwards Huntington (February 27, 1850May 23, 1927) was a railroad magnate and business leader. He was born in Oneonta, New York, USA and died in San Marino, California. He was the nephew of Collis P. Huntington, one of The Big Four, the men instrumental in the creation of the transcontinental railway. Huntington held several executive positions working alongside his uncle with the Southern Pacific Railway. When Collis died in 1900, Henry inherited much of his uncle's fortune. He also married Collis' widow Arabella Huntington, and assumed Collis's leadership role with Newport News Shipbuilding and Drydock Company in Virginia. Shortly thereafter he moved from San Francisco to Los Angeles, a place he had visited only seven years prior. At that time he had exclaimed that one day someone was going to come here (to Southern California) and make a fortune in real estate and transportation. Little did he know that he was foretelling his own future. He founded the Los Angeles Railway (LARY), centered in Los Angeles, and developed a massive intercity transit system known colloquially as the Yellow Car System. The Soto Street substation of the now-defunct Los Angeles Railway. At its most robust size, the system contained over 20 streetcar lines and 1,250 trolleys, most running through the core of Los Angeles and serving such nearby neighborhoods as Echo Park, Westlake, Hancock Park, Exposition Park, West Adams, the Crenshaw district, Vernon, Boyle Heights and Lincoln Heights; and included the 1902 acquisition of the Mount Lowe Railway. In 1905, Huntingdon, A. Kingsley Macomber and William R. Staats developed the Oak Noll subdivision in the rolling, oak-covered terrain between Pasadena and San Marino. The Huntington Mansion, 1915; now the centerpiece of the Huntington Library.In 1903, Huntington began collecting rare books and manuscripts, many from prominent book dealer A.S.W Rosenbach. His collection grew into The Huntington Library, which included an art collection and botanical gardens on his estate in San Marino, California. Today this estate is a popular attraction for tourists, with daily tours being conducted of the library and its grounds. It is also an exclusive resource for researchers of local history. In 1910 Huntington acquired the Wentworth Hotel in Pasadena to be renamed the Huntington Hotel. This hotel served as the grandest hotel in Pasadena until 1990 when it was discovered to be seismically inadequate. It would go down in history as the largest unreinforced concrete structure in Southern California. The facility was sold to new owners who remodeled the hotel to bring it up to modern anti-earthquake standards. It was renamed the Huntington Ritz-Carlton. In 2008, the Huntington Ritz-Carlton was bought again, this time by Hong Kong-based Great Eagle Holdings, and is now operated by their subsidiary, Langham Hotels International. The hotel has been renamed The Langham, Huntington Hotel & Spa. Huntington retired from active business in 1916. His legacy includes several monuments to his name: the cities of Huntington Beach and Huntington Park, the Huntington Library, the Huntington Memorial Library in Oneonta, NY,[1] the Huntington Hotel (now The Langham, Huntington Hotel & Spa), Huntington Hospital, Henry E. Huntington Middle School, and Huntington Drive, a grand boulevard whose median served as a main east-west artery of the Pacific Electric Railroad. Huntington Park on the James River in Newport News, Virginia at the foot of the community's landmark James River Bridge was named in his honor. The Pacific Electric Railway (AAR reporting marks PE), also known as the Red Car system, was a mass transit system in Southern California using streetcars, light rail, and buses. At its greatest extent, around 1925, the system interconnected cities in Los Angeles and Orange Counties and also connected to Riverside County and San Bernardino County in the Inland Empire. The system was divided into three districts: Northern District: Pasadena, San Gabriel Valley, San Bernardino. Southern District: Long Beach, Newport, San Pedro, Santa Ana. Western District: Hollywood, Burbank/Glendale, San Fernando Valley, Santa Monica. Originally, there was an Eastern District, but this was incorporated into the Northern District early in the company's existence. The Pasadena and Pacific railroad was an 1895 merger between the Pasadena and Los Angeles Ry and the Los Angeles and Pacific Ry. It boosted tourism by living up to its motto "from the mountains to the sea." During this time, the Pacific Electric Railway was established by railroad and real estate tycoon Henry Huntington in 1901. Henry's uncle, Collis P. Huntington, was one of the founders of the Southern Pacific Railroad and had bequeathed Henry a huge fortune upon his death. Only a few years after the company's formation, most of Pacific Electric's stock was purchased by the Southern Pacific Railroad, which Henry Huntington had tried and failed to gain control of a decade earlier. In 1911, Southern Pacific bought out Huntington except for the LARy and also purchased several other passenger railways Huntington owned in the Los Angeles area including Pasadena and Pacific, resulting in the "Great Merger" of 1911. At this point the Pacific Electric became the largest operator of interurban electric railway passenger service in the world, with over 1,000 miles of track. The Pacific Electric also ran frequent freight trains under electric power throughout its service area, including one of the few electrically-powered Railway Post Office routes in the country. The PE was also responsible for an innovation in grade crossing safety that was quickly adopted by other railroads, a fully automatic electromechanical grade crossing signal nicknamed the "wigwag." After the Great Merger, Henry Huntington kept the company which provided local streetcar service in central Los Angeles and nearby communities, the Los Angeles Railway (LARy). These trolleys were known as the "Yellow Cars," and actually carried more passengers than the PE's "Red Cars" since they ran in the most densely populated portion of Los Angeles. The company generated a good deal of profit from the land developments created by the Pacific Electric Land Company and linked by the railway.