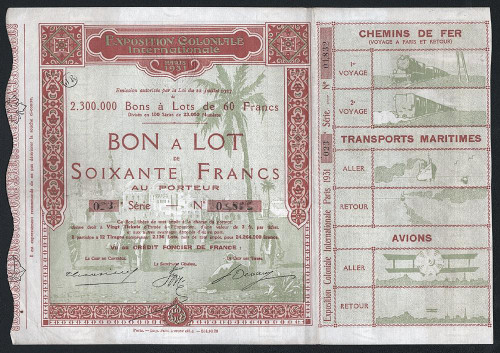 Beautiful certificate from the Exposition Coloniale Internationale issued in 1927 for the 1931 Paris Colonial Exposition. This historic document has an ornate border around it with an underprint of the exposition. This item has the signatures of the company's officers. 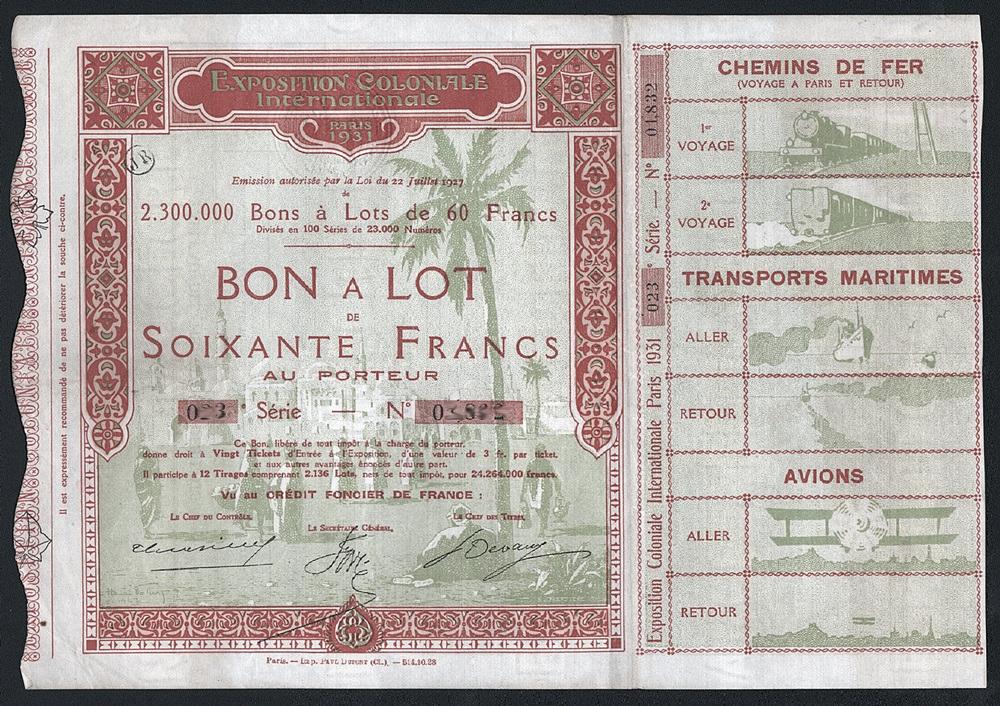 Certificate Vignette
The Paris Colonial Exposition (or "Exposition coloniale internationale", International Colonial Exposition) was a six-month colonial exposition held in Paris, France in 1931 that attempted to display the diverse cultures and immense resources of France's colonial possessions. The exposition opened on 6 May 1931 in the Bois de Vincennes on the eastern outskirts of Paris. The scale was enormous. It is estimated that from 7 to 9 million visitors came from over the world. The French government brought people from the colonies to Paris and had them create native arts and crafts and perform in grandly scaled reproductions of their native architectural styles such as huts or temples. Other nations participated in the event, including The Netherlands, Belgium, Italy, Japan, Portugal, the United Kingdom, and the United States. Politically, France hoped the exposition would paint its colonial empire in a beneficial light, showing the mutual exchange of cultures and the benefit of France's efforts overseas. This would thus negate German criticisms that France was "the exploiter of colonial societies [and] the agent of miscegenation and decadence". The exposition highlighted the endemic cultures of the colonies and downplayed French efforts to spread its own language and culture abroad, thus advancing the notion that France was associating with colonised societies, not assimilating them. The Colonial Exposition provided a forum for the discussion of colonialism in general and of French colonies specifically. French authorities published over 3,000 reports during the six-month period and held over 100 congresses. The exposition served as a vehicle for colonial writers to publicise their works, and it created a market in Paris for various ethnic cuisines, particularly North African and Vietnamese. Filmmakers chose French colonies as the subjects of their works. The Permanent Colonial Museum (today the CitÃ© nationale de l'histoire de l'immigration) opened at the end of the exposition. The colonial service experienced a boost in applications. 26 territories of the empire participated in the Colonial Exposition Issue of postage stamps issued in conjunction with the Exposition. Communist counter-exhibition At the request of the Comintern, a smaller counter-exhibition entitled The Truth on the Colonies, organized by the Communist Party and the CGTU, attracted very few visitors (5000 in 8 months). The first section was dedicated to abuses committed during the colonial conquests, and quoted Albert Londres and AndrÃ© Gide's criticisms of forced labour in the colonies while the second one made an apology of the Soviets' "nationalities' policy" compared to "imperialist colonialism". History from Wikipedia and OldCompany.com (old stock certificate research service)