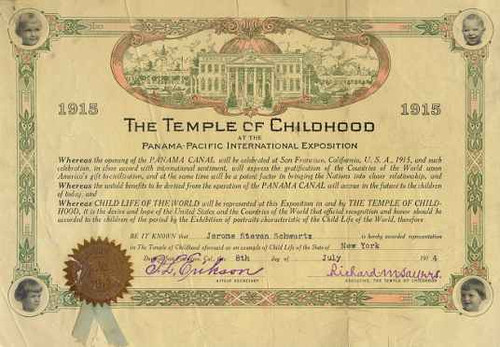 Beautifully engraved certificate from the Temple of Childhood at the Panama-Pacific International Exposition issued in 1914. This historic document has an ornate border around it with vignettes of a child and the beautifully designed Temple of Childhood. This item is hand signed by the exhibit's executive and secretary and is over 87 years old. The certificate has a be torn around the seal, but it would look very nice framed. The Panama Pacific International Exposition was the 1915 worlds fair held in San Francisco, California. Taking over three years to construct, the fair had great economic implications for the city that had been almost destroyed by the great earthquake and fire of 1906. The exposition was a tremendous success, and did much to boost the morale of the entire Bay Area and to help get San Francisco back up on its feet. The exposition was a celebration of the completion of the Panama Canal, and also commemorated the 400th anniversary of the discovering of the Pacific Ocean by the explorer, Balboa. San Francisco was only one of many cities hoping to host the PPIE. New Orleans was its primary rival, but in 1911 after a long competition of advertising and campaigning, President Taft proclaimed San Francisco to be the official host city.