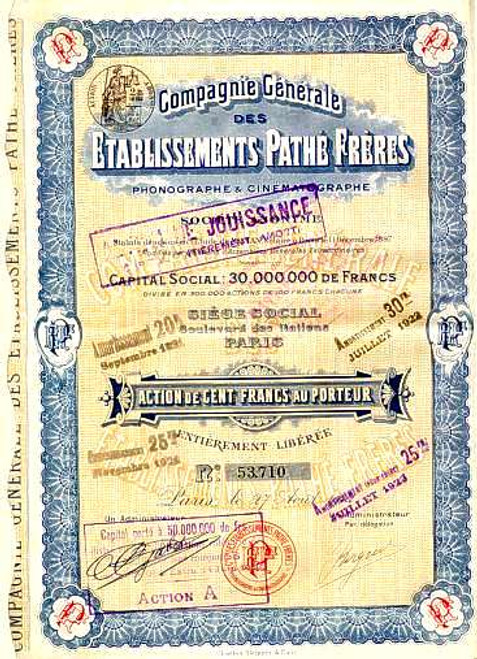 Beautifully engraved Certificate from the famous Pathe Freres Phonographe and Cinematographe Company issued in 1912. The Pathe Freres company was a major company in the supplying of Nicklodeon products and was a large producer of movies especially comedies. The made many types of phonographs and movie projector equipment. 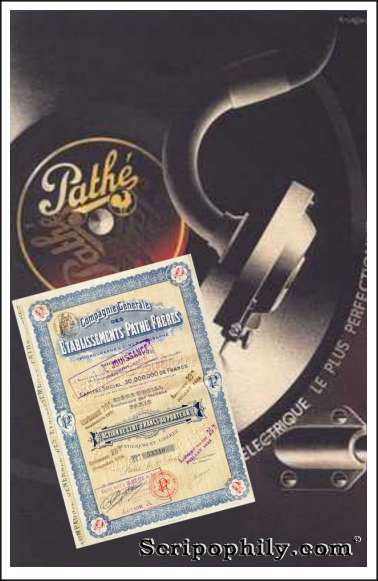 PathÃ©, Charles (1863-1957), French motion-picture magnate, who, in the early 20th century, was the first to create a system for mass-producing motion pictures. PathÃ© began his career as an importer and merchant of the phonograph in France. He extended the business to include projectors and films, creating the company PathÃ© FrÃ¨res in 1896. Beginning in 1901 he concentrated on film production, together with French director and producer Ferdinand Zecca. PathÃ© made films rapidly and reinvested the profits back into the business to improve the technical quality of his films. By 1905 the company was employing numerous production teams of scriptwriters, set builders, cameramen, directors, and actors, making short films in an assembly-line process. By 1908 PathÃ© had opened several foreign branches of his film production company, and his films dominated the world market. PathÃ© remained the largest film producer in the world up to 1914. Since PathÃ© took a special interest in the educational powers of film, his company produced far more informative films than any other. During World War I (1914-1918), PathÃ© effectively abandoned his French production facilities and concentrated on the American branch of his company, PathÃ© Exchange. When he resumed French production in 1917, his company's films were unsuccessful against foreign imports. Consequently, PathÃ© closed down the production side of his company and restricted it to distribution and exhibition. In 1929 he sold his interest in PathÃ© FrÃ¨res and retired.