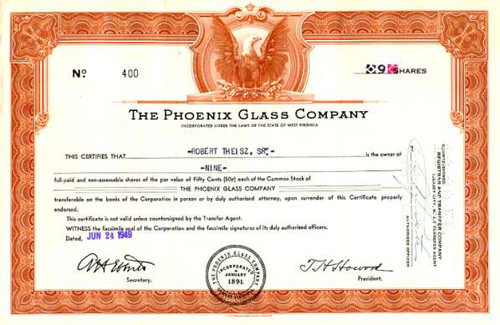 Beautifully engraved certificate from the Phoenix Glass Company issued from 1948 to 1954. This historic document was printed by the Columbian Banknote Company and has an ornate border around it with a vignette of an eagle. This item has the printed signatures of the Company's President ( Thomas Howard ) and Secretary ( A. Howard Ebberts ) and is over 50 years old. 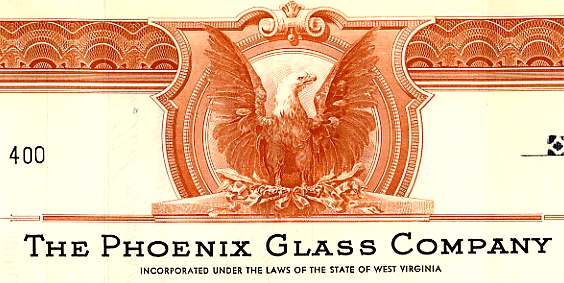 Certificate Vignette
Phoenix Glass Company History 1880 The Phoenix Glass Company is founded by Andrew Howard in Monaca, Pennsylvania. 1884 The first of four fires destroys the factory and like its namesake, the company rises from the ashes. 1893 The second fire destroys the factory. The Company has a successful exhibit at the World's Fair in Chicago. 1904 Thomas Howard becomes President and serves in this capacity for an incredible 60 years. 1920 The Company installs its first continuous tank furnace expanding the manufacturing capabilities and capacity. 1930 During the 1930's, the Company produced sculptured glassware known as the Seldon Line. This line is still coveted by antique collectors today. 1943 The company receives the highest honor bestowed by the Armed Forces on an Industrial Plant, when it is awarded the Army & Navy "E" for excellent performance. The decision is made to start machine production of glassware. 1964 Fire strikes again and the company rebuilds. 1970 Phoenix Glass is acquired by Anchor Hocking Corporation. 1978 Fire destroys the factory's finishing, decorating, carton and warehousing facilities. A major rebuild is in order. 1980 Phoenix plant starts full operations after completing a $26 million rebuilding program. 1987 Newell acquires Anchor Hocking Corporation and creates Anchor Hocking Specialty Glass as a separate operating division. 1998 Major upgrade in manufacturing capabilities is undertaken to position Anchor Hocking Specialty Glass for the 21st century. 1999 Anchor Hocking Specialty Glass continues operations under the Newell umbrella. Newell completes the acquisition of Rubbermaid Incorporated. The Newell name changes to NewellRubbermaid. The Phoenix Glass Company was formed in 1880 in Monaca, Pennsylvania and like many other glass companies at that time, they initially thrived on the market for oil and gas lamp chimneys. Moving on to making lamps, globes, shades and electric light bulbs, they formed alliances with a number of glassworks and individuals who could bring specialist glass-making skills to Phoenix. During the 1880's and 1890's they produced a large volume of coloured cut glass, etched glass, hand decorated glass, and fancy coloured art glass, such as mother-of-pearl satin glass which they patented in 1885. For a time during the 1930's Phoenix had the molds for making this kind of glass on loan from the Consolidated Lamp and Glass Company, which had closed down temporarily to avoid running at a loss. From 1933 to 1936 Phoenix produced Consolidated's Martele designs under the name Phoenix Reuben line. There were differences in the glass quality and the colours used, which are recorded in specialist books on Phoenix glass. On the whole, Phoenix used only one colour and the contrasting colour of the glass; they did not use multi-colouring (apart from some experimental pieces produced in the 1970's by Jeanette Shade and Novelty Company for Phoenix). In 1936 the Martele molds were returned to Consolidated. But Phoenix was already marketing its own designs in Sculptured glass, which used very similar techniques. Their Wild Rose vase was virtually identical to the Consolidated vase called Dogwood, but the colouring and finish were usually different. Phoenix produced an extensive range of Sculptured glass designs which were different from those produced by Consolidated; and apart from the period 1933 to 1936, the Consolidated designs were not produced by Phoenix. Because there seems to be so much confusion between the two companies, it is worth stating very clearly that Phoenix Glass and the Consolidated Lamp and Glass Company were quite separate companies at all stages. Phoenix stopped making their Sculptured Art Glass in 1958, but there were some later products made from the Phoenix molds. The Davis-Lynch Company borrowed some molds and made a few hundred vases in plain colours (no contrasting colouring) in the late 1960's. Anchor Hocking took over Phoenix Glass in 1970, and in 1976 they also had some Sculptured pieces produced in solid plain colours without any contrasting colouring. Their have been special pieces made for Phoenix workers and for special commemorative occasions, in small numbers. Phoenix is now part of Anchor Hocking Industrial Glass, and no longer makes art glass. History is from Anchor Hocking Press information.