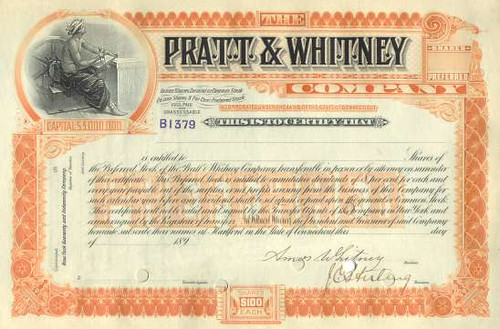 Beautifully engraved unissued Certificate from the famous Pratt & Whitney Company dated 189_. This SCARCE historic document was printed by the International Banknote Company and has an ornate border around it with a vignette of a Semi - Nude Mercury at a drafting table. It has normal period cancellations in this historic and crisp certificate. This item is hand signed by Amos Whitney as President and is over 126 years old. 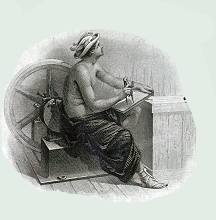 Certificate Vignette
Amos Whitney (1832-1928), U.S. mechanical engineer and manufacturer, organized Pratt & Whitney (1860) with Francis Pratt. Employed by W. A. Rogers and G. M. Bond in 1879 to develop the Rogers-Bond comparitor, credited with rescuing mechanical science and industry from inconvenience. He also established policies leading to successful training of apprentices there and eventually became president, retiring in 1901 when the company was acquired by Niles-Bement-Pond Company. He was born Oct. 8, 1832, Biddeford, Maine, and died Aug. 5, 1928, Portland, Maine. Francis Ashbury Pratt (1827-1902), U.S. mechanical engineer and machine-tool manufacturer, founded Pratt & Whitney (1865), Hartford, Connecticut, with Amos Whitney. He is credited with being first to permit production of fine gear work. He manufactured machine tools and tools for gun making and sewing machines. He promoted interchangeable parts and the adoption of standard system of gages for the United States and Europe. Among several machine-tool patents, his most important was for planing metal (July 28, 1869). He was born Feb. 15, 1827, Woodstock, Vermont, and died Feb. 10, 1902, Hartford, Connecticut. Below is a brief the history of the Pratt and Whitney Company: 1860 Pratt and Whitney Company is founded by Francis Pratt and Amos Whitney. 1861 American Civil War starts, and PRATT & WHITNEY begins manufacturing guns and gun making machinery. PRATT & WHITNEY put into practice the concept of interchangeable parts that had been pioneered by Samuel Colt, Elijah Root, Amos Whitney's cousin Eli, and others. Their method depended on the use of accurate gages. At this time, there was no standard for the commercial inch. 1869 Francis Pratt and Amos Whitney hire Worcester Warner to design gear cutting machines and Ambrose Swasey to build telescopes {they both leave PRATT & WHITNEY in 1880 to form Warner & Swasey}. Pratt and Whitney is formally incorporated in the State of Connecticut with $300,000. 1879 William Rogers and George Bond begin development work on a machine that later would establish the 'standard for the inch'. 1880 A set of master bars accurate to millionths was made at PRATT & WHITNEY under the supervision of Rogers and Bond. 1882 The famous device known as the Rogers-Bond Comparator was perfected {machine is currently displayed at Smithsonian, in Washington, DC}. 1885 PRATT & WHITNEY introduces the Standard Measuring Machine, making accurate measurements possible 1889 PRATT & WHITNEY patents the first coin-operated telephone. 1890 Mark Twain finances the development of the Paige Typewriter. 1893 The "inch" is legally defined as a fraction of the International Meter of the metric system. 1898 Francis Pratt retires. 1902 Francis Pratt dies U.S. National Bureau of Standards (NBS) is established. 1909 PRATT & WHITNEY begins production of the Standard Measuring Machines. 1910 Machine tolerances to 0.001-inch are achievable. 1914 World War I 1918 Major William Hoke, US Army, perfects a process to produce gage blocks, and PRATT & WHITNEY secures the rights and starts research to start mass production. 1920 Amos Whitney dies 1925 Frederick Rentschler approaches PRATT & WHITNEY, looking for funds and a location to build his new aircraft engine. PRATT & WHITNEY loans him $250,000, the use of the Pratt & Whitney name, and space in their building. This was the beginning of the Pratt & Whitney Aircraft Company. Pratt & Whitney's first engine was called the Wasp, completed on Christmas Eve 1925. The Wasp developed 425 horsepower on its third test run. It easily passed the Navy qualification test in March 1926, and by October the Navy had ordered 200 engines. The Wasp exhibited speed, climb, performance and reliability that revolutionized American aviation. 1860 Pratt and Whitney Company is founded by Francis Pratt and Amos Whitney. 1929 Frederick Rentschler, ended his association with Pratt & Whitney Machine Tool and formed United Aircraft and Transport Corporation, the predecessor to today's United Technologies. His agreement allowed Renstchler to carry the name with him to his new coproration. The rest is History!