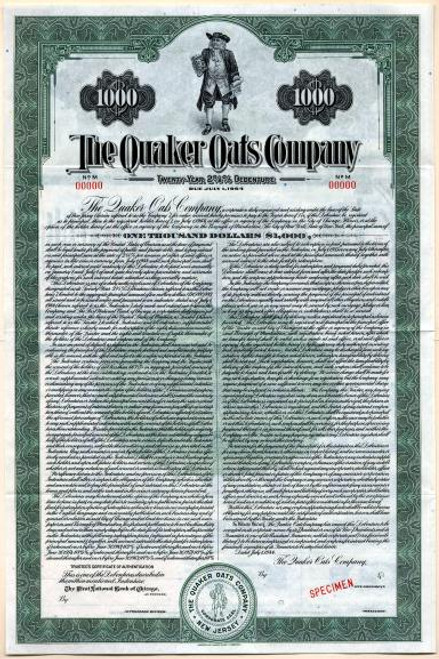 Beautifully engraved specimen certificate from the The Quaker Oats Company printed in 1944. This historic document was printed by the American Banknote Company and has an ornate border around it with a vignette of the Quaker Man. This item is over 66 years old. 40 coupons attached on right side.

Certificate Vignette
In the 1850s Ferdinand Schumacher and John Stuart founded oat mills. Shumacher the German American Cereal Company, in Akron, Ohio and Stuart the North Star Mills in Ontario, Canada. In 1870 Shumacher ran his first known cereal advertisement in the Akron Beacon Journal newspaper. In Ravenna Ohio on 4 September 1877 the first trademark for a breakfast cereal "a man in 'Quaker garb'" is applied for by Henry Seymour, owner of the Quaker Mill Company. In 1879 John Stuart and his brother Robert, joined with George Douglas to form Imperial Mill and set up shop in Chicago, Illinois. In 1881 Henry Crowell bought the Quaker Mill Company, and in the following year he launched a national advertising campaign for Quaker Oats. In 1885 Quaker Oats introduced the cereal box, making it possible to buy in quantities other than bulk. In 1888 The American Cereal Company was formed by the merger of 7 major oat millers. Ferdinand Schumacher was made President, Henry Crowell, General Manager and John Stuart the Secretary Treasurer. In 1889 the American Cereal Company introduced the 1/2 oz. trial size and, as a promotion, they distributed one to every home in Portland, Oregon using boys on bicycles. Later this promotion was extended to other cities. A second promotion involved placing dinner plates from a very desirable selection within the then regular (not round) boxes of oats. 1901 saw the formation of the Quaker Oats Company in New Jersey, with its headquarters in Chicago. Quaker introduced the first in a series of cookie recipes on the box in 1908. In 1911 Quaker purchased the Great Western Cereal Company. The iconic round box made its first appearance in 1915. Later that year Quaker offered the first cereal box premium to buyers. By sending in one dollar and the cut out picture of the "Quaker Man" customers receive a double boiler for the cooking of oatmeal. In the 1920s Quaker offered a crystal radio and introduced "Quaker Quick Oats" an early convenience food. In the 1930s Quaker was one of the many companies using the Dionne Quintuplets for promotional purposes. During the Second World War, FDA head Herbert Hoover promotes oats to the public in order to preserve wheat for use in the war effort. In 1946 artist Jim Nash was commissioned to produce a head portrait of the Quaker Man, which became the basis for Haddon Sundblom's famous version of 1957. In 1972 John Mills designed the current logo. In 1969, Quaker acquired Fisher-Price, a toy company. In the 1970s, the company financed the making of the film Willy Wonka and the Chocolate Factory, in return obtaining a license to use a number of the product names mentioned in the movie for candy bars. In 1991, Quaker Oats spun off its Fisher-Price division. In August 2001, Quaker merged with PepsiCo, primarily for its Gatorade brand of soft drink. The merger created the fourth-largest consumer goods company in the world. Though the main prize of PepsiCo was Gatorade non-carbonated sports drink, Quaker's cereal and snack food division complemented the existing Frito-Lay salty-snacks division. Since the late 1980s, actor Wilford Brimley has appeared in television commercials extolling the virtues of oat consumption, typically to a young child, as to introduce the concept of oatmeal consumption as a long tradition. In the 1990s Nickelodeon animated children's show Rugrats, the biggest fear of one of the characters, Chuckie Finster (the scaredycat of the bunch), was "the man on the oatmeal box". In Rugrats in Paris: The Movie, Chuckie overcame this fear when he became Chuckie Chan. The song lyrics to his transformation included the line "He can stare into the eye/of the oatmeal guy!". History from Wikipedia and OldCompany.com (old stock certificate research service). About Specimen Certificates Specimen Certificates are actual certificates that have never been issued. They were usually kept by the printers in their permanent archives as their only example of a particular certificate. Sometimes you will see a hand stamp on the certificate that says "Do not remove from file". Specimens were also used to show prospective clients different types of certificate designs that were available. Specimen certificates are usually much scarcer than issued certificates. In fact, many times they are the only way to get a certificate for a particular company because the issued certificates were redeemed and destroyed. In a few instances, Specimen certificates were made for a company but were never used because a different design was chosen by the company. These certificates are normally stamped "Specimen" or they have small holes spelling the word specimen. Most of the time they don't have a serial number, or they have a serial number of 00000. This is an exciting sector of the hobby that has grown in popularity over the past several years.