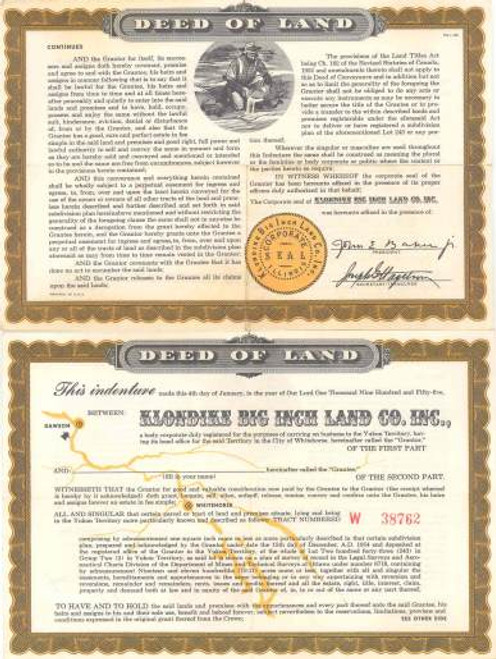 Issued certificate from the Klondike Big Inch Land Company dated 1954. This historic document has been ISSUED with a person's name on the front and was folded and has an ornate border around it with a vignette of a man panning for gold with an underprint of a Klondike map on the verso. This item has the printed signatures of the Company's President ( John Baker, Jr. ) and its Secretary and is over 63 years old. 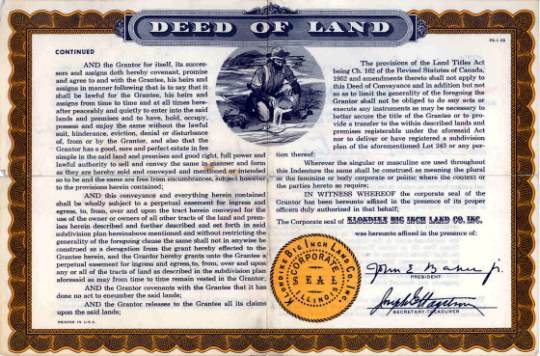 Back of Certificate
The "Klondike Big Inch" was a promotional campaign by Quaker Harvest Oats in the 1950's. The deeds, for one square inch of Yukon land, were included in cereal boxes. Although it was a very successful marketing enterprise, the deeds were strictly promotional and never entitled holders to any actual land. The land has long ago reverted back to the Crown of Canada. From the time "The Challenge of the Yukon" began in 1947, kids all over the country rushed home from school to listen to the radio program about a Royal Canadian Mounted Police officer who kept law and order in the territory with the help of his dog Yukon King and horse Rex. The hero was so popular that in 1953 the program was renamed "Sergeant Preston of the Yukon." Despite the popularity of the program, however, television chipped away at radio audiences in the '50s. At the same time, sales declined of the sponsoring Quaker Oats Puffed Wheat and Puffed Rice cereals, victims of innovative new cereals and compelling advertising gimmicks - like toys in cereal boxes. Then an advertising executive for Quaker dreamed up the idea of giving away land in the Yukon. Quaker In January 1955, the deeds were packaged in million boxes of Quaker Puffed Wheat and Puffed Rice, both to encourage sales and to publicize the show's transition from radio to television. The idea turned into one of the most successful sales promotions in North American business history. Consumers snatched up boxes within a couple of weeks. It was so successful that a follow-up promotion offered 1-ounce "Pokes" of Yukon river sand for 25 cents, according to an article from the Yukon News. It would have been next to impossible to register so many separate deeds, so on advice of counsel, Quaker Oats set up an Illinois corporation - the Klondike Big Inch Land Co. - as the registered owner. A spokeswoman for Quaker Oats said nobody seems to know the exact sequence of events, but the company failed to make provision for paying taxes on the property and subsequently went out of business. The Canadian government seized the land in 1965 for an outstanding $37.20 tax bill. In spite of the deed promotion, the television show was short-lived. The radio show that sparked children's imaginations for eight years failed on television after a couple of years perhaps because images couldn't replace imagery. Sgt. Preston rode into his last 24-hour Yukon day in 1957. But Quaker Oats, the Yukon Lands Branch and the Yukon Department of Commerce still get calls and letters from people asking what happened to their little piece of the Yukon. 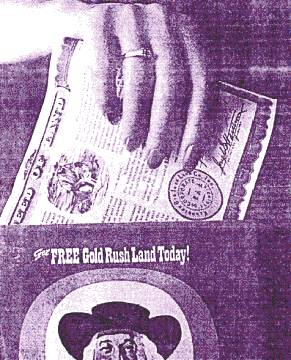 Officials in Ottawa, only slightly amused, refer all correspondents to the Quaker Oats Co. in Chicago. And Quaker has the unhappy - and the time consuming - task of telling them that the deeds are worthless, that the Klondike Big Inch Co. no longer exists, and that the Canadian government has taken back the land. Quaker has been threatened with lawsuits over the matter, and is tired of the time and expense required to answer letters. Quaker executives cringe at the mention of the promotion. John Rourke, the company's public relations director, claims that they "probably wouldn't get into such a campaign today because of the legal ramifications." It's unlikely, however, that a lawsuit would proceed very far; since the Klondike Big Inch Land Co. has been dissolved, there's nobody left to sue. In effect, it would be like suing a dead person who has left no assets. That's the bad news. The good news is that, thanks to the nostalgia boom, a number of memorabilia experts claim the old deeds are now worth as much as $90 each to collectors. And Bruce Baker, the man who started it, takes special delight in pointing out that that makes the deeds worth about twice as much as a share of stock in the Quaker Oats Co. So there you have it. No Klondike property but a nice bit of memorabilia, and things could be worse. Additional information I have tells of one American gentleman who travelled all over the United States collecting these deeds until he had 10,880. He figured that amounted to about 75 square feet of land and wrote to the Quaker Oats legal department wondering if he could consolidate the different inches into one big chunk. He said he would prefer a piece of land "near the water" and "as quiet an area as possible." Needless to say he was quite perturbed when he found the deeds were worthless.