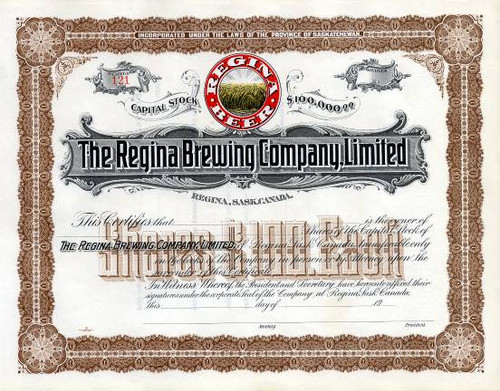 Beautiful unissued certificate from the Regina Brewing Company, Limited. This historic document was printed by the Gugler Lithograph Company in 1915 and has an ornate border around it with a vignette of the company's logo with a field of wheat. 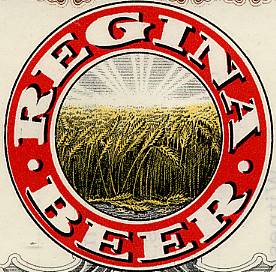 Certificate Vignette
Regina Brewing Co. Ltd (1300 Dewdney Ave) This brewery was opened in 1907 and operated until prohibition in 1915. The Saskatchewan Temperance Act was found unenforceable and prohibition openly flaunted. In 1924 a new act was passed allowing the sale of liquor through government run stores. It was ten years later that beer was available in hotel bars, and only to men. This brewery was purchased by Fritz Sick who refurbished the plant and reopened it 1n 1925. It was purchased by Molson's in 1959 and they expanded the plant. At its peak it produced 700 bottles a day. The plant was closed in 2002. History from Saskatchewan Genealogical Society.