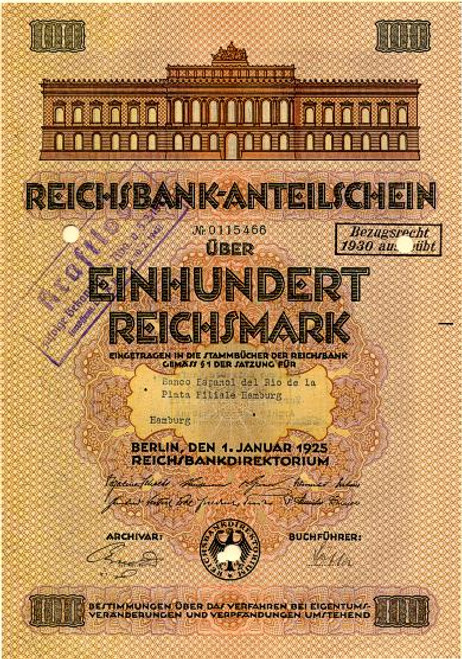 Beautiful certificate from the Reichsbank-Anteilschein dated in 1925. This historic document was printed by Bestimmungen Uber Das Verfahren and has an ornate border around it with a vignette of the Reich Bank building. This item has the signatures of the Company's Archivar and Buchfuhrer and is over 82 years old.

Certificate Vignette
The German Reich Bank was a legal entity of the public right with the seat in Berlin. It was allowed to maintain branch offices. The tasks of the German realm Reich resulted from its position as issuing bank of the realm. It had the exclusive right to spend notes. Furthermore it had the money and exchange inland and with the foreign country to regulate as well as for the utilization of the available funds of the German economy in non-profit and economicalally appropriate way provide. Based by the banking law of 14.3.1875 with effect starting from 1.1.1876 with a capital stock of M 120.000.000. -. The German realm Reich was subordinate as German issuing bank of the unrestricted sovereignty of the realm. It served the implementation of the goals in the context it entrusted field, in particular for the Sicherstellung of the value of the German currency. 1924 became the realm bank according to the Dawesplan an institute independent of the realm government. The choice of the realm bank president took place via the general council, consisting of 14 members, from it sieved foreign. The realm president had only confirmation rights. After the seizure of power by the national socialists 1933 the general council was eliminated, the realm president alone appointed and dismissed the president as well as the members of the board of directors. Starting from 1937 the realm bank was subordinate again to the realm government, starting from 1939 directly the "leader and realm chancellor" Adolf Hitler, who could grant thereby even the credits to the realm. 1939 renaming into German realm Reich. After the Second World War the German realm Reich heard to exist on. Addresses (1943): Beside the realm central bank existed in Berlin in the realm 21 realm bank principal establishments, 94 realm bank places, 402 realm branch banks. In the realm bank also or other security stored.