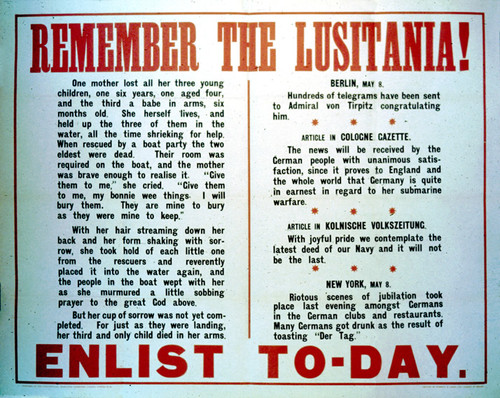 REMEMBER THE LUSITANIA - ENLIST TODAY ENLIST TODAY- WWI 1915 Artist: Anon. WWI UK and Canada Date: 1915 Light fold lines, overall excellent. Minor wear on folds, reinforced. Size: 50"x40" One mother lost all her three young children.... Dramatic broadside made after the sinking; includes quotes from May 8th, German newspapers (including one from New York) gloating in triumph. Scarce. Sensational, at the moment agitation propaganda. (steamships/submarines/ agitation propaganda) RMS Lusitania was a British luxury ocean liner owned by the Cunard Steamship Company and built by John Brown and Company of Clydebank, Scotland. Christened and launched on Thursday, June 7, 1906. Lusitania met a disastrous end as a casualty of the First World War when she was torpedoed by the German submarine U-20 on May 7, 1915. The great ship sank in just 18 minutes, eight miles (15 km) off the Old Head of Kinsale, Ireland, killing 1,198 of the people aboard. The sinking turned public opinion in many countries against Germany. It is often considered by historians to be the second most famous civilian passenger liner disaster after the sinking of Titanic.