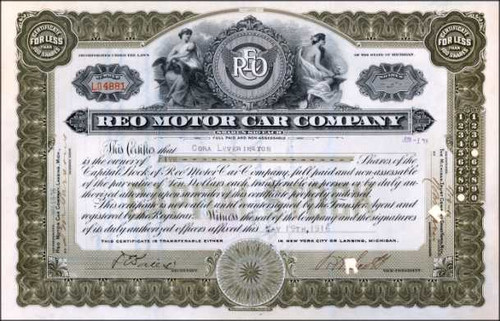 We are offering this historic and beautifully engraved Stock Certificate issued by the Reo Motor Car Company in 1916. This cancelled document has an nice ornate border around it with a vignette of two allegorical women sitting on both sides of the REO Logo. This certficiate is hand signed by the company's vice president, Richard H. Scott who later became president. 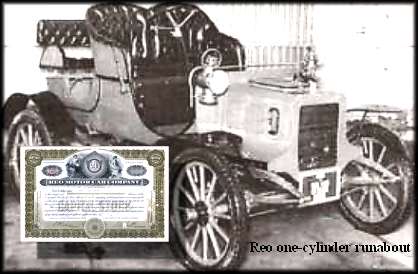 Ransom Eli Olds, a pioneer in the design and manufacture of American automobiles, established this plant for his Reo Motor Car Company in 1904. At this factory, Olds continued the success he had first achieved with the introduction of the Oldsmobile in 1901. His production of low price vehicles for the mass market and his manufacturing innovations contributed to the growth of the U.S. automobile industry. In 1885, Ransom became a partner in his father's machine shop firm, which soon became a leading manufacturer of gas-heated steam engines. Ransom developed an interest in self-propelled land vehicles, and he experimented with steam-powered vehicles in the late 1880s. In 1896 he built his first gasoline car and one year later he formed the Olds Motor Vehicle Company to manufacture them. At the same time, he took over his father's company and renamed it the Olds Gasoline Engine Works. Although Olds' engine company prospered, his motor vehicle operation did not, chiefly because of inadequate capitalization. In 1899 he liquidated it and incorporated a new company, the Olds Motor Works, with financial backing from Samuel L. Smith, a wealthy lumber magnate. Operations were shifted from Lansing to Detroit, and Smith, who owned most of the company's stock, became president while Olds served as vice president and general manager. During its first year in Detroit, the company had a slow start, largely due to Olds' indecision about what type of car to produce. By 1901, however, Olds had perfected the design for the curved-dash Oldsmobile, which sold for $650. Olds was the first to develop a low price car intended for a mass market, and it proved a smashing success. As production of the curved-dash car got underway, however, almost the entire factory was destroyed by fire. Olds still managed to manufacture and sell 600 of these cars in that year. Heavy demand for the Oldsmobile led Olds to modify the automobile manufacturing techniques in use at that time. From the beginning, he relied on subcontractors and made the use of outside supplier parts more a part of his manufacturing process than anyone had before. In addition, Olds "devised a progressive assembly line system, which contained all the elements of the modern assembly line with the exception of the power conveyor" according to his biographer Glenn A. Niemeyer. By 1904 sales had reached 5,000 automobiles, a figure unheard of at that time. Much of Olds' success in selling the car was due to an unprecedented advertising campaign in national periodicals and a number of highly publicized races and endurance runs. Despite his success, Olds grew increasingly restive because of Samuel Smith's control of the Olds Motor Works. Bitter feelings between Smith and Olds culminated in the ouster of Olds from his post as vice president and general manager in 1904. In August 1904, Olds organized the R.E. Olds Motor Car Company, a name that was soon changed to Reo in order to avert a threatened lawsuit from the Olds Motor Works. Although a number of individuals invested in the company, Olds held fifty-two percent of the stock as well as the titles of president and general manager. To provide Reo with a reliable supply of parts, he organized a number of subsidiary firms like the National Oil Company, the Michigan Screw Company, and the Atlas Drop Forge Company. By 1907 Reo had gross sales of four million dollars and the company was one of the top four automobile manufacturers in the U.S. After 1908 however, despite the introduction of improved cars designed by Olds, Reo's share of the automobile market shrank due in part to the development of giants like Ford and General Motors. Reo's stagnation must be attributed in large part to Olds himself, who was talented mechanically but not administratively. Although Olds added a truck manufacturing division to Reo in 1910 as well as a Canadian automobile plant, he gradually lost interest in the company as he turned his attention to other ventures. In 1915, he relinquished the title of general manager to his protÃ©gÃ© Richard H. Scott and eight years later he gave up the company's presidency as well, retaining only the honorary position of chairman of the board. From 1915 to 1925, under Scott's direction Reo remained profitable though small and earned a reputation for well-built cars and trucks. In 1925, however, Scott launched an ambitious expansion program designed to make the company more competitive with other automobile manufacturers by offering cars in different price ranges. The failure of this program and the effects of the Depression caused such heavy losses that Olds came out of retirement in 1933 and took control of Reo again. Olds' return was brief, however. Late in 1934, he resigned from the company's executive committee because it refused to approve his plan for a new four-cylinder car. In 1936, the same year Reo abandoned the manufacture of automobiles, Olds resigned as chairman of the board. Until his death on August 26, 1950, he devoted his time to many other business interests. In the years after Olds left Reo, the firm continued to experience serious financial problems. Although World War II truck orders enabled it to make something of a comeback, the company remained unstable in the postwar era. In 1954 the company was sold to the Bohn Aluminum and Brass Company of Detroit, and three years later it became a subsidiary of the White Motor Company. White merged Reo with Diamond T Trucks in 1967 to form Diamond Reo Trucks, Inc. In 1975, this firm filed for bankruptcy and most of its assets were liquidated. The history is from the National Park Service.