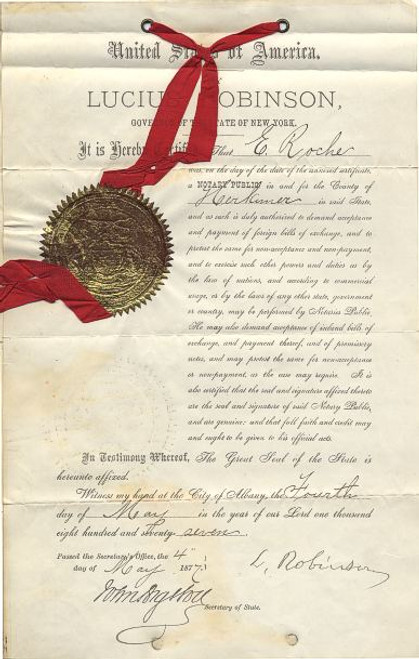 Document from the Remington Arms Company appointing a British agent, William Lott Grimwade, with Power of Attorney issued in 1877. This historic document was printed by The State of New York with a seal of the State of New York. The Notary on the first page has the signatures of the New York Secretary of State and Governor Lucius Robinson, and the document on the second page is signed by Eliphalet Remington and is over 132 years old. 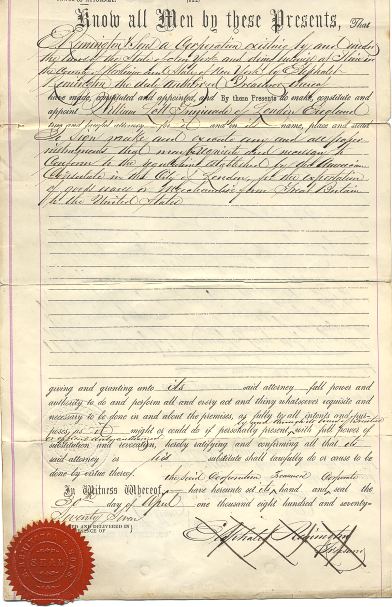 Second page
Eliphalet Remington (October 28, 1793 August 12, 1861) designed the Remington rifle. He was born in 1793 in the town of Suffield, Connecticut, to parents whose origins lay in Yorkshire, England. He was a blacksmith, and at 23, he hand-made a revolutionary sporting rifle using a firing mechanism bought from a dealer, producing the barrel himself. The gun received such an enthusiastic response that Remington decided to manufacture it in quantity, and formed the firm of E. Remington and Sons, which he headed until his death in 1861 . By the mid-1800s the gun had become immensely popular with American sportsmen and was one of the standard guns used in what has been called "the winning of the West". The company continued to grow and to develop its product and gradually began the manufacture of other sporting goods, such as bicycles. At the present time, the company is known as the Remington Arms Co., Inc. What began as a one-man enterprise has become one of the world's leading manufacturers of sporting arms. Before the Remington Company was formed, American sportsmen relied upon foreign sources for the majority of the sporting guns they used. The production of a rifle within the reach of men who wanted and needed a good gun changed the picture permanently. Eliphalet and Elizabeth Remington's second child was a son, Eliphalet II, named for his father. As the couple's only son of their four children who survived childhood, Eliphalet II followed in his father's footsteps and entered the blacksmith trade at the family's rural forge in Herkimer County, New York. Situated in the Mohawk River Valley -- the eastern gateway to the expanding Northwest Territory and in the path of the still-to-be-constructed Erie Canal -- the fieldstone Remington forge was astride a trade route that would bring prosperity to the family and the other inhabitants of the region. The expansion of population and wealth along that conduit of commerce would cause Eliphalet Remington to enter the arms making business. Lucius Robinson (November 4, 1810, Windham, Greene County, New York - March 23, 1891, Elmira, Chemung County, New York) was an American lawyer and politician. He was Governor of New York from 1877 to 1879. [edit] Life He graduated from Delaware Academy in Delhi, New York. Afterwards he studied law in the offices of Erastus Root and Amasa J. Parker, was admitted to the bar in 1832, and commenced practice in Catskill, N.Y. He was District Attorney of Greene County from 1837 to 1840. Then he removed to New York City and became a member of Tammany Hall. He joined the Republican Party when it was founded, and representing this party was a member from Chemung County of the New York State Assembly in 1860 and 1861. He was New York State Comptroller from 1862 to 1865. In 1861, he was elected on the Union ticket nominated by Republicans and War Democrats. In 1863 he was defeated for re-nomination at the Union state convention, but the nominated candidadte refused to run, and the Republican State Committee put Robinson back on the ticket, and he was re-elected. After the war he joined the Democratic Party again, and was re-nominated for Comptroller on the Democratic ticket, but this time was defeated by the Republican candidate Thomas Hillhouse. After his defeat he resumed the practice of law. In 1871-72 he was a member of the New York State Constitutional Commission. He was a director of the Erie Railroad, and was Acting President of the company while the President Peter H. Watson was travelling about Europe. In 1875, he was again elected State Comptroller defeating the Republican candidate, former United States Treasurer Francis E. Spinner. While serving as Comptroller, he was elected Governor, and was in office from 1877 to 1879, the first governor to serve a three-year term after the amendment to the state constitution in 1874. As governor, he opposed Tammany Hall vigorously what led the Tammany leader John Kelly to have himself nominated for Governor by Tammany Hall at the next election in 1879 with the intention to split the Democratic vote, and so defeat Robinson. This happened, and the Republican candidate Alonzo B. Cornell was elected Governor with less votes than Robinson and Kelly together. Robinson was a delegate to the 1876 Democratic National Convention and supported Samuel J. Tilden for President. He died from pneumonia, and was buried at the Woodlawn Cemetery, Elmira. History from Wikipedia and OldCompany.com (old stock certificate research service).