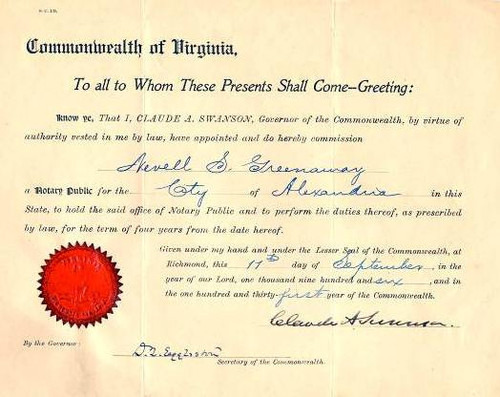 Appointment of Nevell S. Greenaway to Notary Public in the City of Alexandria, Virginia signed by Claude A. Swanson, Governor, Democrat 1906-1910. Also included is a cover letter sign by the Governor. Swanson, Claude Augustus (1862-1939) -- also known as Claude A. Swanson -- of Chatham, Pittsylvania County, Va. Born in Swansonville, Pittsylvania County, Va., March 31, 1862. Democrat. Lawyer; U.S. Representative from Virginia 5th District, 1893-1906; resigned 1906; Governor of Virginia, 1906-10; defeated, 1901; U.S. Senator from Virginia, 1910-33; delegate to Democratic National Convention from Virginia, 1920, 1924, 1928, 1932; U.S. Secretary of the Navy, 1933-39; died in office 1939. In 1905 Swanson was elected Governor of Virginia. He resigned his seat in Congress February 1, 1906, and served as Governor until February 1, 1910. These four years were marked by great expansion of the power of the executive branch in Virginia government, which had previously been dominated by the legislature. Swanson increased the influence of the state board of education with regard to textbook approval and certification of plans for new buildings, plus funded consolidation of one-room primary schools and the building of new rural high schools. Using matching funds, he altered the state's concept of local education, appealing to local pride. He also is credited with the reduction of public debt, inauguration of agricultural demonstration and extension work, construction of a state sanatorium for treatment of tuberculosis, legislation to protect women and children from excessive hours of work, creation of the two state executive departments of health and roads, and laying of groundwork for an organized system of road improvement. On August 1, 1910, Swanson was appointed to fill the vacant U. S. Senate seat left by the death of Senator John W. Daniel. He later was elected for four more terms. He became a central figure in controlling Democratic Party policy in the Senate. President Woodrow Wilson especially relied on his leadership in gaining passage of much legislation including the Federal Reserve Act. Swanson's reputation for getting things done in the Senate came from his ability to forge alliances of normally competitive groups, the trust he inspired from his colleagues (he infallibly lived up to his word), and his remarkable self-effacement. Not one of the many pieces of leglislation which he shepherded to enactment bore his name. He let others take the credit of accomplishment. He was reputed to never have forgotten a face or name, and his friendships were many as a result. Adding to his personal popularity throughout Swanson's long public career, his anecdotes, political epigrams, down-home proverbs, and general good humor were legendary. Possibly Swanson's greatest interest during his Senatorial years was the U. S. Navy. He was convinced, in the face of strong isolationist sentiments, that a strong navy was essential for survival of the nation and for the possibility of world peace. On March 3, 1933, Swanson resigned his Senate seat to accept appointment as Secretary of the Navy in Franklin D. Roosevelt's original cabinet. During the next two years he succeeded in getting Congressional approval for construction of a greater tonnage of warships than in all the previous twelve years combined. In 1935 Japan openly violated treaty agreements with regard to naval armament, and Swanson asked and received authority for more construction. When he died in office on July 7, 1939, just eight weeks before Hitler's armies invaded Poland to touch off World War II, the United States was well on the way to constructing the most powerful navy in the world. Without Swanson's efforts to this end, it is recognized that the Pearl Harbor disaster two years later would probably have paralyzed both the Navy and the nation. History from Virginia Historical Highway Marker