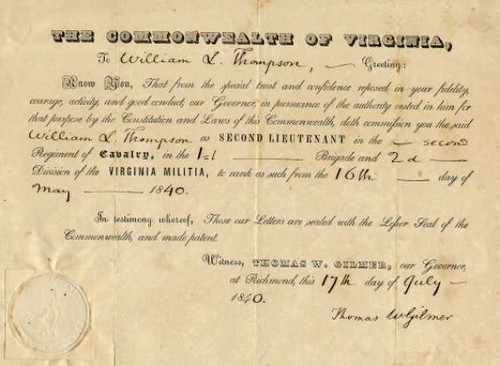 Virginia Militia Document - Appointment of William L. Thompson as Second Lieutenant in the 1st Brigade and 2nd Division of the Virginia Militia dated May 16, 1840. This appointment is hand signed by Thomas Walker Gilmer, Governor of Virginia. GILMER, Thomas Walker, a Representative from Virginia; born in Gilmerton, Albemarle County, Va., April 6, 1802; attended the common schools; studied law; was admitted to the bar and commenced practice in Charlottesville, Va.; member of the State house of delegates 1829-1836 and again in 1839 and 1840, serving as speaker the last two years; elected Governor of Virginia and served from March 31, 1840, until his resignation on March 20, 1841; elected as a Whig to the Twenty-seventh Congress and as a Democrat to the Twenty-eighth Congress and served from March 4, 1841, until February 16, 1844, when he resigned; appointed Secretary of the Navy in the Cabinet of President Tyler February 15, 1844, and served until he was killed by the bursting of a gun on board the U.S.S. Princeton on the Potomac River, near Washington, D.C., February 28, 1844; interment in Mount Air Cemetery, Albermarle County, Va.