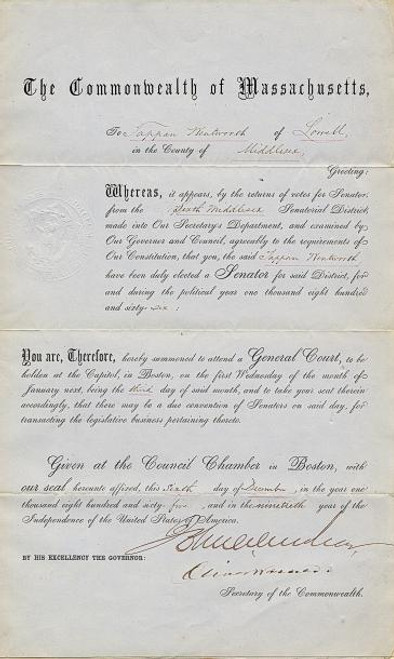 Election Results for Senator Tappan Wentworth of Lowell in the County of Middlesex Commonwealth of Massachusetts signed by Governor John Albion Andrew and the Secretary of the Commonwealth, Hon. Oliver Warner in 1865. John Albion Andrew (1818-1867) Governor of the Commonwealth of Massachusetts 1861-1866 John Andrew swept into the Massachusetts governorship with the greatest popular majority to date to lead the Commonwealth during through the years of America's Civil War. Andrew's support of the Union was a catalyst for Massachusetts' early and wholehearted participation in the Union effort. Following the Union's victory, Andrews advocated reconciliation and friendship with the South. A graduate of Bowdoin College, the young Andrew was described by his friends as generous in spirit and remarkably able to form friendships and secure trust. He was not regarded as an intellectual leader, but was recognized as having a strong noble impulse. It wasn't until his admission to the bar that Andrew became active in public life. He was a leader in Massachusetts' Free Land Party and was an early supporter of the Massachusetts Republican Party. He was elected as a Representative in the General Court in 1858, where he took a leadership position as an abolitionist. In 1860, the Massachusetts people elected him by the widest gross margin to that date. Governor Andrew took office on January 2, 1861 and immediately placed the Commonwealth's troops at a state of readiness to aid the Union. On April 15, 1861, President Lincoln made an urgent request for states to send 75,000 volunteers to defend the Capitol. Under Governor Andrew's leadership, Massachusetts' troops were the first to arrive in Washington and the first troops to fight in the Civil War. In 1863, Andrew again took a leadership role by petitioning President Lincoln to compel the Army to accept the Massachusetts 54th Regiment, which would be formed entirely of black troops under the leadership of volunteer white officers. He obtained from Secretary of War Edwin M. Stanton the first authorization for raising Black troops. The first Black regiment (54th Massachusetts infantry) was dispatched from Boston in May 1863. Andrew selected the best officers for the Black troops and provided them with necessary equipment. Though he was not an academic luminary and made had no pyrotechnic rise through state or federal offices, John Andrew became the Bay State's most celebrated Governor of his generation. Tappan Wentworth (1802 - 1875) WENTWORTH, Tappan, a Representative from Massachusetts; born in Dover, N.H., February 24, 1802; received a liberal schooling; studied law; was admitted to the bar in 1826 and commenced practice in York County, Maine; moved to Lowell, Mass., in 1833 and continued the practice of law; member of the common council 1836-1841; served in the State house of representatives in 1851, 1859, 1860, 1863, and 1864; member of the State senate in 1848, 1849, 1865, and 1866; elected as a Whig to the Thirty-third Congress (March 4, 1853-March 3, 1855); unsuccessful candidate for reelection in 1854 to the Thirty-fourth Congress; engaged in the practice of his profession until his death in Lowell, Mass., June 12, 1875; interment in Lowell Cemetery.