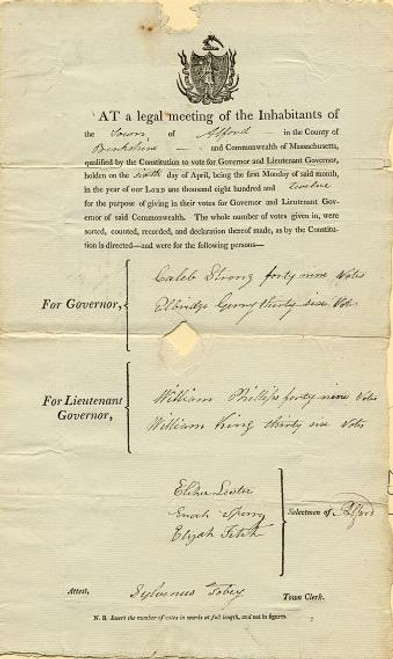 Governor Election Summary from the town of Alford, Massachusetts dated 1812. This historic document summarizes the election results for Governor and Lieutenant Governor. For Governor Caleb Strong had 41 votes and Elbridge Gerry has 36 votes. For Lieutenant Governor William Phillips had 49 votes and William King had 36 votes. The document was signd by the Selectmen of Alford and the Town Clerk, Sylvanus Tobey. GERRY, Elbridge, (1744 - 1814) GERRY, Elbridge, (grandfather of Elbridge Gerry [1813-1886] and great-grandfather of Peter Goelet Gerry), a Delegate and a Representative from Massachusetts and a Vice President of the United States; born in Marblehead, Mass., July 17, 1744; pursued classical studies and graduated from Harvard College in 1762; engaged in commercial pursuits; member, colonial house of representatives 1772-1775; Member of the Continental Congress 1776-1780 and 1783-1785; a signer of the Declaration of Independence; delegate to the Constitutional Convention in Philadelphia in 1787; refused to sign the Constitution, but subsequently gave it his support; elected as an Anti-Administration candidate to the First and Second Congresses (March 4, 1789-March 3, 1793); sent to France on a diplomatic mission in 1797; unsuccessful Republican candidate for Governor of Massachusetts in 1801 and again in 1812; Governor of Massachusetts 1810-1811; elected Vice President of the United States on the ticket with James Madison in 1812 and served from March 4, 1813, until his death in Washington, D.C., on November 23, 1814; interment in the Congressional Cemetery.