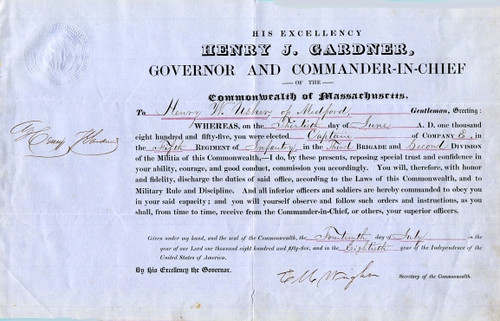 Historic Certificate of Appointment of Henry W. Usher to Captain from Henry J. Gardner, Governor and Commander-in-Chief of Massachusetts issued in 1855. This item has the signatures of the Governor (Henry J. Gardner) and Secretary (Ephraim M. Wright) of the Commonwealth of Massachusetts and is over 162 years old. Henry Joseph Gardner (June 14, 1819 July 21, 1892) was the Governor of Massachusetts from 18551858. Gardner was the candidate of the Know-Nothing movement, and was elected governor as part of the sweeping victory of Know-Nothing candidates in the Massachusetts elections of 1854. In line with the nativist and anti-Catholic politics of the Know-Nothing movement, Gardner proposed an amendment to the Massachusetts state constitution banning appropriations of tax funds to Catholic schools, which was passed by the state legislature and ratified after it was approved by referendum. During Gardner's term in office, Anthony Burns was arrested in Boston under the Fugitive Slave Law of 1850. Edward G. Loring, a Suffolk County probate judge who also as served U.S. commissioner of the Circuit Court in Massachusetts, ordered that Burns be forced back into slavery in Virginia, outraging abolitionists and the increasingly antislavery public in Massachusetts. Under the pressure of a public petition campaign spearheaded by William Lloyd Garrison, the legislature passed two Bills of Address calling for Judge Loring to be removed from his state office, in 1855 and 1856, but in both cases Gardner declined to remove Loring. (A third Bill of Address to remove Loring from office was later approved by Gardner's Republican successor, Nathaniel Prentice Banks.) History from Wikipedia and OldCompanyResearch.com (old stock certificate research service).