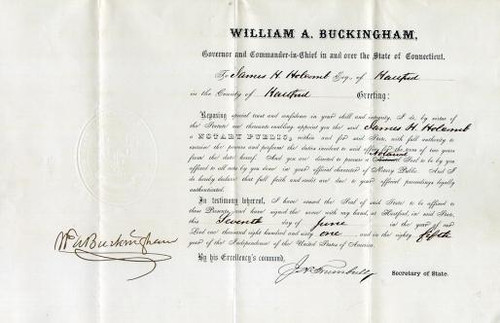 William A. Buckingham Notary Public Appointment Certificate dated 1861. This historic document is hand signed by William A. Buckingham Governor of Connecticut and Connecticut's Secretary of State. This document was issued at the beginning of the Civil War is over 139 years old. WILLIAM A. BUCKINGHAM 1804-1875 PICTURE Born in Lebanon, Conn., May 28, 1804, died Feb. 3, 1875. Educated in the public school system and entered the mercantile business at 21, in Norwich. Elected Mayor, 1849, 50,56, and 57. Elected Governor of Connecticut, 1858 for seven terms. Served during the Civil War. Elected to the U.S. Senate in 1868 and died in office.