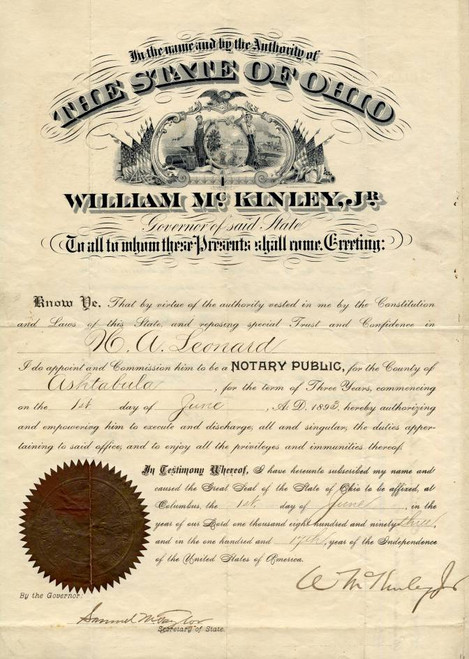 Appointnemt of a Notary Public for the state of Ohio signed by William McKinley, Jr. as Governor dated 1893. This historic document has an an ornate vignette representative of the State of Ohio. This item has the original signatures and is over 119 years old. 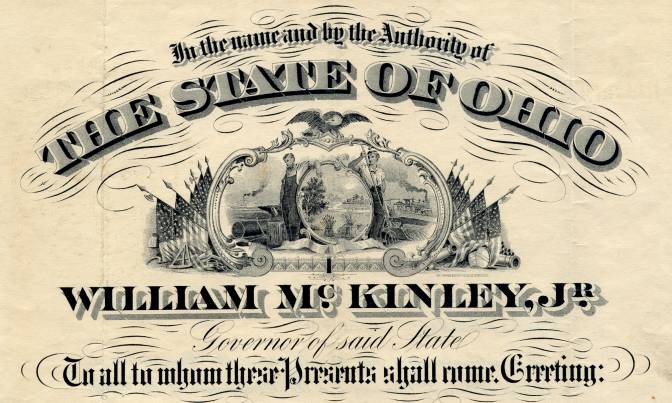 William McKinley, Jr.'s Signature
William McKinley, Jr. (January 29, 1843 September 14, 1901) was the 25th President of the United States (18971901). He is best known for winning fiercely fought elections, while supporting the gold standard and high tariffs; he succeeded in forging a Republican coalition that for the most part dominated national politics until the 1930s. He also led the nation to victory in 90 days in the Spanish American War. McKinley, a native of Ohio, was of Scots-Irish and English descent, born into a large family, and served with distinction in the Civil War. He became an able lawyer, quickly joined the Ohio Republican party ranks, was married by age 28 and became a father briefly before the deaths of his two daughters. When wife Ida's health suddenly diminished in 1873, McKinley assumed a caregiving role for her, which eventually allowed her to serve as First Lady; his need for a diversion from these duties prompted him to launch his political career.[1] By the late 1870s, McKinley had become a national Republican leader. He served in Congress as Representative of Ohio, and also was elected Governor of Ohio. His signature issue was high tariffs on imports as a formula for prosperity, as typified by his McKinley Tariff of 1890. As the Republican candidate in the 1896 presidential election, opposing Democrat William Jennings Bryan, he promoted pluralism among ethnic groups. His campaign, designed by Mark Hanna, introduced revolutionary advertising techniques, and defeated the crusade of his arch-rival, William Jennings Bryan. McKinley presided over a return to prosperity after the Panic of 1893, with the gold standard as a keystone. He demanded that Spain end its atrocities in Cuba, which were angering Americans;[2] Spain resisted the interference and the Spanish-American War began in 1898. The U.S. victory was quick and decisive, as the weak Spanish fleets were sunk and both Cuba and the Philippines were captured within several months. As a result of the 1898 Treaty of Paris, the former Spanish colonies of Puerto Rico, Guam, and the Philippines were annexed by the United States as unincorporated territories, and U.S occupation of Cuba began; this occurred in the face of the opposition from Democrats and anti-imperialists fearing a loss of republican values. McKinley also annexed the independent Republic of Hawaii in 1898, with all its citizens becoming full American citizens. McKinley was reelected in the 1900 presidential election following another intense campaign against Bryan, which focused on foreign policy and the return of prosperity. President McKinley was assassinated by anarchist Leon Czolgosz in September of the following year, and succeeded by his Vice President Theodore Roosevelt. McKinley's presidency receives an aggregate rating of 20th among the presidents in the historical rankings of Presidents of the United States. History from Wikipedia and OldCompany.com (old stock certificate research service).