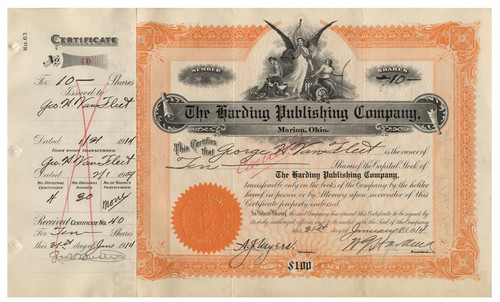 Founded Around 1907, a reorganization of Harding's newspaper, kept 2/3 of stock and let employees buy last 1/3, first profit sharing arrangement like this in Ohio. Prior to serving his first official political office, Warren Harding was heavily involved the local businesses of the city of Marion, Ohio. Harding's family moved to Marion in 1882 when Harding was in his late teens. By the 1890s, Harding was director of the Marion County Bank as well as the Marion County Lumber Company and Marion County Telephone Company. 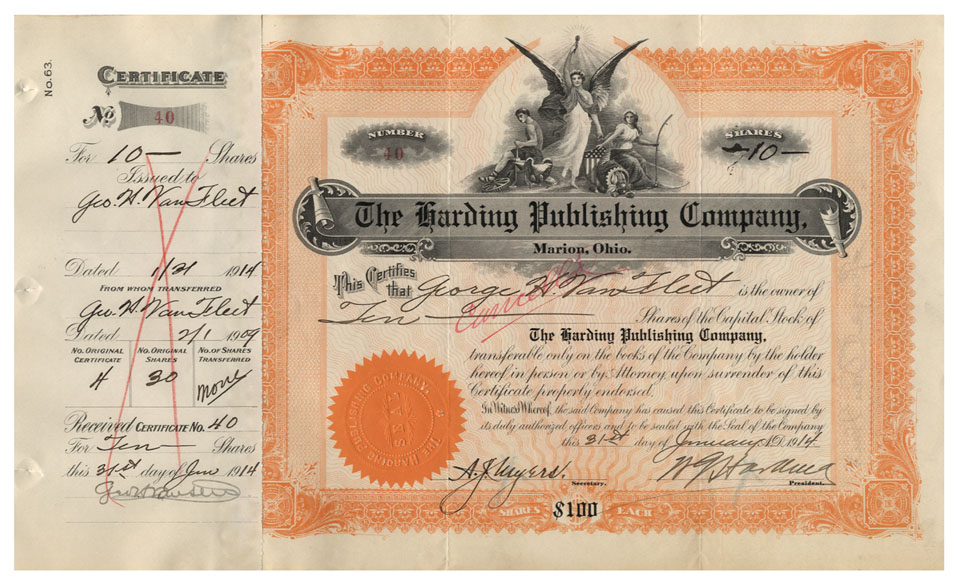 Certificate
HARDING, Warren G., American statesman: b. Corsica, Morrow County, Ohio, 2 Nov. 1865. He studied at Ohio Central College, Iberia, in 1879-82; and since 1884 has been engaged in the newspaper business at Marion, Ohio, as president of the Harding Publishing Company, publishers of the Star. In 1900-04 Mr. Harding was a member of the Ohio senate and from 1904 to 1906 was lieutenant-governor. In 1910 he was Republican nominee for governor of Ohio, but failed of election. Subsequently he was elected to the United States Senate for the term 1915-21. Harding has been compared to McKinley as a harmonizer in his own party. In the Senate his course had been that of a "regular," though not that of a narrow party man. Warren Gamaliel Harding (November 2, 1865 August 2, 1923) was the 29th President of the United States, serving from March 4, 1921 until his death. Although Harding died one of the most popular presidents in history, the subsequent exposure of scandals that took place under him, such as Teapot Dome, eroded his popular regard, as did revelations of an affair by Nan Britton, one of his mistresses. In historical rankings of the U.S. presidents, Harding is often rated among the worst. Harding was born in Blooming Grove, Ohio. Except when political service took him elsewhere, he lived in rural Ohio all his life. When not yet 20 years old, he settled in Marion and bought The Marion Star, building it into a successful newspaper. In 1899, he was elected to the Ohio State Senate, and after four years there successfully ran for lieutenant governor. He was defeated for governor in 1910, but was elected to the Senate in 1914. When Harding ran for the Republican nomination for president in 1920, he was considered an also-ran with little chance of success. The leading candidates, such as General Leonard Wood, could not gain a majority to secure the nomination, and the convention deadlocked. Harding's support gradually grew until he was nominated on the tenth ballot. He conducted a front porch campaign, remaining for the most part in Marion, and allowing the people to come to him. Running on a theme of return to normalcy, he won in a landslide over Democrat James M. Cox and Socialist Party candidate Eugene Debs, becoming the first sitting senator to be elected president. Harding appointed a number of well-regarded figures, including Andrew Mellon at the Treasury, Herbert Hoover at Commerce, and Charles Evans Hughes at the State Department. A major foreign policy achievement came with the Washington Naval Conference of 19211922, in which the world's major naval powers agreed on a naval limitations program that lasted a decade. Two members of his cabinet, Interior Secretary Albert Fall and Attorney General Harry Daugherty, were implicated in corruption. The resulting scandals did not fully emerge until after Harding's death, nor did word of his extramarital affairs, but both greatly damaged his reputation. Harding died of a cerebral hemorrhage caused by heart disease in San Francisco while on a western speaking tour; he was succeeded by his vice president, Calvin Coolidge. History from Wikipedia and OldCompany.com (old stock certificate research service). This is the first time we have had this certificate for sale.