Beautiful bank check from the Treasurer of Marion County Ohio Company printed in 1898. This historic document was printed by the W.H. Stanage & Company and has an ornate border around it with a vignette of an deer. This item has an original signature of the Auditor and is endorsed by Warren G. Harding and is over 114 years old. 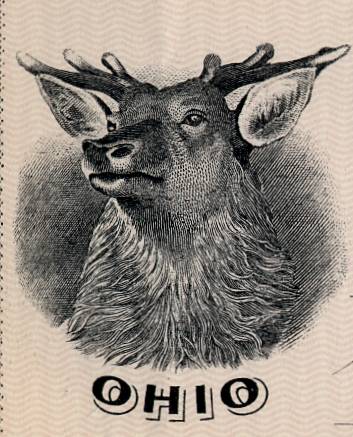 Warren G. Harding Signature
Warren Gamaliel Harding (November 2, 1865 August 2, 1923) was the 29th President of the United States (192123). A Republican from Ohio, Harding was an influential self-made newspaper publisher. He served in the Ohio Senate (18991903), as the 28th Lieutenant Governor of Ohio (190406) and as a U.S. Senator (191521). He was also the first incumbent United States Senator and the first newspaper publisher to be elected President. His conservativism, affable manner, and "make no enemies" campaign strategy made Harding the compromise choice at the 1920 Republican National Convention. During his presidential campaign, in the aftermath of World War I, he promised a return of the nation to "normalcy". This "America first" campaign encouraged industrialization and a strong economy independent of foreign influence. Harding departed from the progressive movement that had dominated Congress since President Theodore Roosevelt. In the 1920 election, he and his running mate, Calvin Coolidge, defeated Democrat and fellow Ohioan James M. Cox in the largest presidential popular vote landslide in American history (60.36% to 34.19%) since popular vote totals were first recorded in 1824. History from Wikipedia and OldCompany.com (old stock certificate research service)