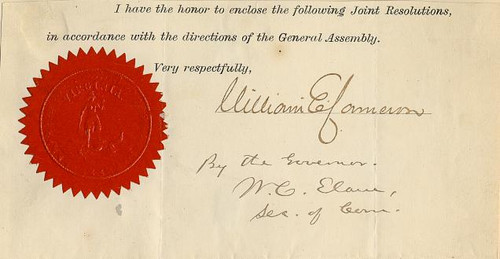 Cut signature from the Commonwealth of Virginia. This item was hand signed by the Governor of the Commonwealth of Virginia, William E. Cameron. William Evelyn Cameron (November 29, 1842 January 25, 1927) was a soldier, lawyer, journalist, and politician. He served as Governor of Virginia from 1882-1886. He was the candidate of the Readjuster Party headed by William T. Mahone. William Evelyn Cameron was born in Petersburg, Virginia. His parents were Walker Anderson Cameron and Elizabeth Page Walker Cameron. He attended local schools, then a military academy in Hillsboro, North Carolina. Cameron briefly attended Washington College in St. Louis, Missouri, and received an appointment to the United States Military Academy at West Point, New York. When the American Civil War started, he abandoned his preparatory studies and joined the Confederate Army, serving throughout the war. After the war, Cameron returned to Petersburg, where he married Louisa Clarinda Egerton (1846-1908) on October 1, 1868. They had three children. He initially began practicing law. However, he decided to pursue a career in journalism and edited newspapers in Petersburg, Norfolk and Richmond, Virginia. Cameron served as mayor of Petersburg from 1876 to 1882. In 1881, he was the candidate of the Readjuster Party headed by William T. Mahone and was elected governor of Virginia. During his term from 1882-1886, he attempted to implement his party's programs of debt reduction and racial integration in certain areas. After his term as governor ended in 1886, Cameron briefly left Virginia, before returning and resuming a career in politics as more conservative politician. Cameron represented Petersburg in the Virginia Constitutional Convention of 1901-1902. He served as editor of the Norfolk Virginian-Pilot newspaper from 1906 to 1919. William Evelyn Cameron died on January 25, 1927 at the home of one of his sons in Louisa County, Virginia. He was buried at Blandford Cemetery in Petersburg. History from Wikipedia and OldCompanyResearch.com.