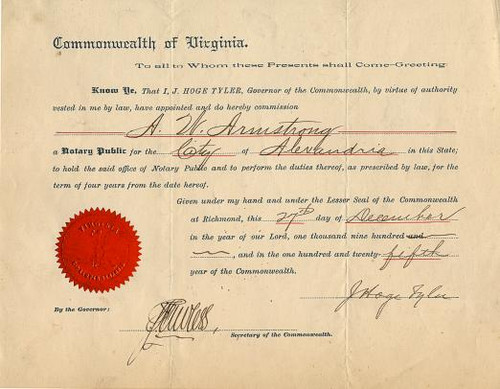 Beautiful appointment of A. W. Armstrong as a Notary Public certificate from the Commonwealth of Virginia issued in 1925. This item has the signatures of the Governor, James Hoge Tyler of the Commonwealth and is over 82 years old. James Hoge Tyler (1846 - 1925) was a U.S. political figure. He was lieutenant governor of Virginia from 1890 to 1894, and governor of Virginia from 1898 to 1902. He compiled The Family of Hoge, published (posthumously) in 1927. A copy is viewable at Heritage Quest Online. Governor Tyler was from an old illustrious family, both pioneers and carriage trade. He was born at Blenheim in Caroline County, Virginia on August 11, 1846. Two hours after his birth his mother died. His grandparents took him 300 miles by carriage to his mother's home,Hayfield, subsequently known as Belle Hampton in Pulaski County, Virginia. There he was raised by his maternal grandparents, General James Hoge and Eleanor Haven Howe. (General Hoge was the nephew of his wife's father and Eleanor Howe was the niece of her husband's mother, and thus they were cousins, both grandchildren of Major Joseph Howe, who was the brother (most likely) or cousin of: George Augustus Howe, 3rd Viscount Howe; Richard Howe, 1st Earl Howe, 4th Viscount Howe; and Sir William Howe, 5th Viscount Howe.) About 1862, at the age of 16, he enlisted in the Army of the Confederate States of America and served as a private until the end of the American Civil War rather than accept a commision as an officer and be separated from his friend. On November 16, 1868, he married Sue Hammet of Montgomery County, Virginia, and the children by that marriage were: Edward Hammet, James Hoge, Stockton Heth, Belle Norwood, Sue Hampton, Henry Clement, and Lily. He was a devout Presbyterian. Three times he was elected to the General Assembly of the Presbyterian Church. In 1892 he was a delegate to the Pan Presbyterian Alliance in Toronto and in 1896 a delegate to the convention in Glasgo, Scotland, where he presided over one of the sessions. He was a member of the boards of trustees of Hampden-Sidney College, the Union Theological Seminary and the Synodical Orphans Home at Lynchburg. He died January 3, 1925 at Belle Hampton. The Family of Hoge He spent the last years of his life compiling The Family of Hoge, a genealogy of the descendents of William Hoge and Barbara Hume, his great-great-great-grandparents and the American progenitors of the Hoge Family. "About the close of the seventeenth century -- 1682 -- a young man named William Hoge, son of Sir James Hoge, who was a son of George Hoge, a son of Sir John Hoge, of Musselboro, Scotland, evidently in good circumstances, came to America on account of the religious persecutions under the Stuarts.... ...He came to America in 1682 in the ship Caledonia to Perth Amboy, New Jersey, as a young man, and there came on the same ship a Sir James Hume from the same place in Scotland, who was the son of gentry and was well off. He was related to the Humes of Nine Wells and Lord Hume or Home, Earl of Home, and was related to David Hume, the great Historian and author. With Hume on the ship was his wife and daughter, Barbara. The man and his wife died on the voyage and Barbara was left an orphan and went with an uncle, Dr. Johnson of Perth Amboy. William Hoge afterward married Barbara in 1695. James Hoge Tyler was: 1st cousin once removed to R.S. Reynolds, founder of Reynolds Metals, Reynolds Wrap, etc. 1st cousin twice removed to James Fulton Hoge, Junior, 6 time Pulitzer Prize winner and current editor of Foreign Affairs 1st cousin twice removed to Warren McClamroch Hoge, editor in various capacities for the New York Times and currently their correspondent at the United Nations. 2nd cousin once removed to Frederick Funston, the man who saved San Francisco after the 1906 earthquake and fire. 2nd cousin once removed to Moses Drury Hoge, D.D., The Chaplain of the Confederacy 4th cousin to John Hoge who personally financed the Hoge Building in Seattle. 2nd great-grand nephew of George Augustus Howe, 3rd Viscount Howe; Richard Howe, 4th Viscount Howe, and William Howe, 5th Viscount Howe. Half-3rd cousin 3 times removed of George III of Great Britain 4th great-grand son of Sir James Hoge 4th great-grand son of Sir James Hume Half-4th great-grand nephew of George I of Great Britain 6th great-grand son of Sir David Home of Wedderburn The Family of Hoge was published posthumously in 1927. History from Wikipedia and OldCompanyResearch.com.