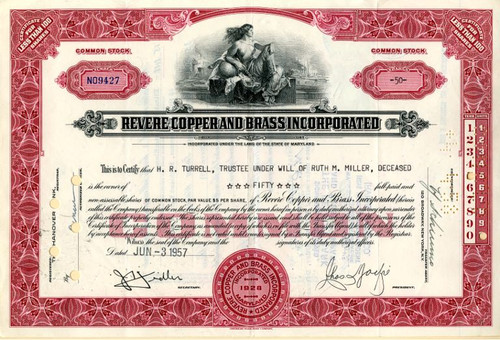 Beautifully engraved Certificate from the famous Revere Copper and Brass, Incorporated issued before 1960. This historic document was printed by the American Banknote Company and has an ornate border around it with a vignette of a bare brested woman leaning against a globe with an industrial city in the background. This item has the printed signatures of the company's officers and is over 56 years old. 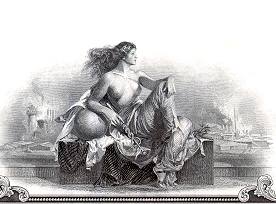 Certificate Vignette
Revere Copper and Brass Incorporated (formerly known as Republic Brass) was founded by the Patriot, Paul Revere in Canton, Massachusetts in 1801. By the 1960's, Revere was an international Fortune 400 corporation with 26 divisions and over 14,000 employees worldwide. Through a series of mergers in 1928 and 1929, Revere Copper became Revere Copper and Brass Inc. headquartered in Rome, New York with several plants and product divisions. Revere Copper and Brass ranked 96th among United States corporations in the value of World War II military production contracts. By 1938, James M. Kennedy, an employee, had invented copper-clad cookware, which went into production and is now known as Revere Ware. The company exists today as Revere Copper Products, with headquarters in Rome, New York and is an employee-owned company. Revere, as a copper company, had its beginnings. Paul Revere paid $6,200 for two pieces of property on the Neponset River in what later became the town of Canton, Mass. improved with a dwelling house, a trip-hammer shop, and a "cole" house. The property, the site of an abandoned gunpowder mill, was bought in January on the basis of a Government loan of $10,000 promised by the Navy Department, which wanted an American source of the all-important copper sheathing for its wooden vessels. Although technological difficulties slowed his production, by October 24 at the latest, Paul Revere, at 67 years of age, had rolled his first copper sheets. 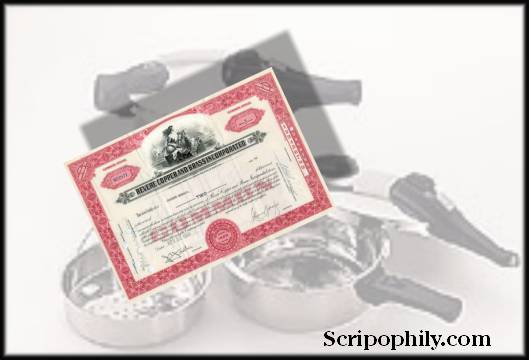