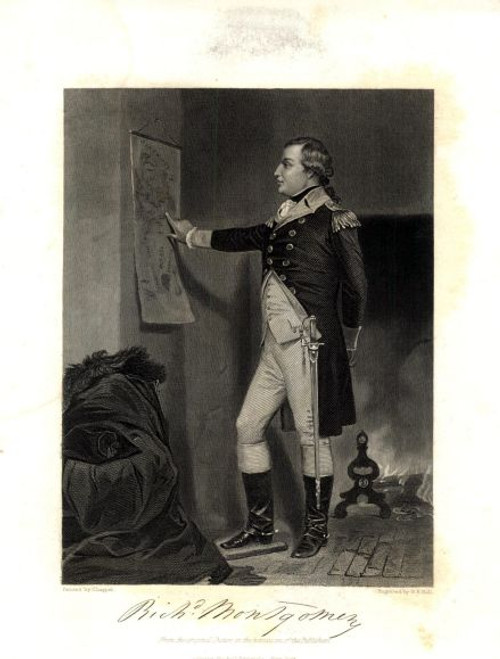 Printed in the 1800's, original engraving (8"x 11") by Johnson, Fry Publishers, New York. This came from the Herzog and Co. / R.M. Smythe archives when they were relocating their offices in Manhattan. This engraving would look terrific framed. Richard Montgomery (December 2, 1738 December 31, 1775) was an Irish-born soldier who first served in the British Army. He later became a Major General in the Continental Army during the American Revolutionary War and he is most famous for leading the failed 1775 invasion of Canada. Montgomery was born and raised in Ireland. In 1754, he enrolled at Trinity College, Dublin, and two years later joined the British army to fight in the French and Indian War. He steadily rose through the ranks, serving in North America and then the Caribbean. After the war he was stationed at Fort Detroit during Pontiac's War, following which he returned to Britain for health reasons. In 1773, Montgomery returned to the Thirteen Colonies, married Janet Livingston, and began farming. When the American Revolutionary War broke out, Montgomery took up the Patriot cause, and was elected to the New York Provincial Congress in May 1775. In June 1775, he was commissioned as a Brigadier General in the Continental Army. After Phillip Schuyler became too ill to lead the invasion of Canada, Montgomery took over. He captured Fort St. Johns and then Montreal in November 1775, and then advanced to Quebec City where he joined another force under the command of Benedict Arnold. On December 31, he led an attack on the city, but was killed during the battle. The British found his body and gave it an honorable burial. It was moved to New York City in 1818. History from Wikipedia and OldCompany.com (old stock certificate research service)