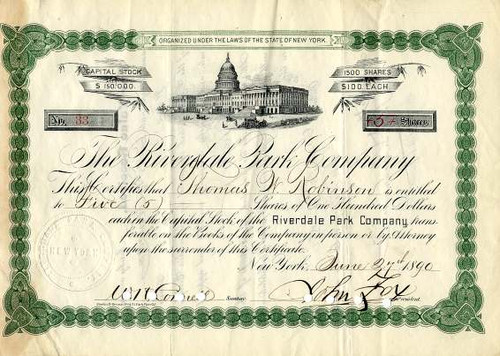 Beautifully engraved certificate from the Riverdale Park Company issued in 1890. This historic document was printed by the Martin B. Brown Company and has an ornate border around it with a vignette of the U.S. Capitol. This item is hand signed by the Company's President ( John Fox ) and Secretary ( W. H. Connell ) and is over 114 years old.

Certificate Vignette
The Town of Riverdale was first developed in the 1890s by the Riverdale Park Company of New York. It is the home of Riversdale, one of the largest and most famous historical properties in Maryland. Riversdale was established in 1801 by Henri Joseph Stier. Before the mansion was completed, he returned to Europe, and his daughter, Rosalie, took over the completion of the home. The mansion quickly became a social center for the Washington area. Rosalie Calvert wrote detailed letters about the construction, and her letters are being used to restore Riversdale to its original grandeur. In the 1830s, the B&O railroad was granted the right of way through the Riversdale mansion property. The first houses in Riverdale were built around the train station in the 1890s. Riverdale became known as a picturesque suburb of Washington. Large well-constructed Victorian and Craftsmen homes were built around the turn of the century and into the 1920s. Bungalows and cottages were built on smaller lots in the 1930s and l940s. After World War II, a building boom of Cape Cod and Ranch homes created housing for 400 new families. The Riverdale Park Company built the first model houses in the subdivision in order to entice development to the area. The Riverdale Park Company also built the original Victorian B&O Railroad station in the early 1890s. In 1920 the Town of Riverdale was officially incorporated in Prince George's County; the town was officially renamed to Riverdale Park in 1998 in recognition of its historical beginnings. The town boundaries included the Riversdale mansion, the original subdivision development that occurred north and west of Riversdale, and an area west of Baltimore Avenue and north of Hyattsville known as West Riverdale. This piece of land was originally acquired by Francis Carmody and had been part of the larger tract of Ellaville, located west of the main gate to the Riversdale Plantation at Oliver Street and Baltimore Avenue. The incorporation of West Riverdale into the town boundaries allowed Riverdale Park's merchants to expand commercial development along Baltimore Avenue. During the 1920s and 1930s, the town focused on building and improving its basic infrastructure, particularly roads and lighting. This era also saw the beginning of Today, Riverdale is the site of new housing developments, including Madison Hill where 90 new homes are being built. History form the University of Maryland.