Beautifully engraved certificate from the RJR Nabisco Holdings Group, Inc. issued in 1991.This historic document was printed by the Security Columbian United States Banknote Corporation and has an ornate border around it with a vignette of an allegorical man and woman with Nabisco cookies. This item has the printed signatures of the Company's Chairman of the Board ( Louis V. Gerstner ) and Secretary and is over 12 years old. These bonds were issued after the hostile $25 billion takeover by the firm Kohlberg Kravis Roberts of RJR Nabisco, a deal that stood as the largest of all time for eight years. 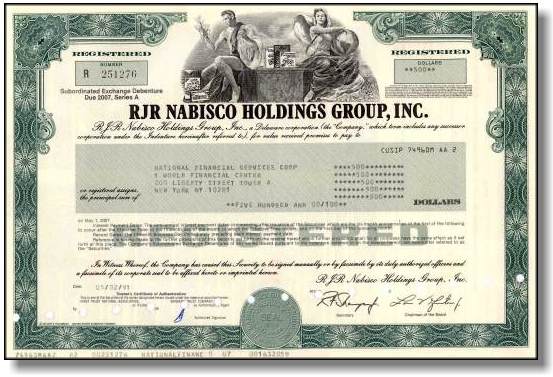 Certificate
RJR Nabisco Holdings Corp. is the parent company of RJR Nabisco, Inc., an international consumer products company with subsidiaries engaged in domestic and international tobacco businesses and an 80.7 percent interest in Nabisco Holdings Corp., a large multinational food company. Prior to the January 1995 initial public offering of 19.5 percent of Nabisco stock, Nabisco was a wholly owned subsidiary of RJR Nabisco, Inc. RJR Nabisco, through its subsidiaries, is a world leader in consumer packaged goods, with companies making high-quality, superior-value food and tobacco brands available in more than 170 countries and territories. R.J. Reynolds Tobacco Co. is the second-largest tobacco company in the United States, manufacturing one of every four cigarettes sold in the domestic market. Reynolds Tobacco's product line includes four of the nation's ten best-selling brands: Winston, Camel, Salem, and Doral. R.J. Reynolds International is a leading multinational competitor in the global tobacco industry, with a strong position in the fast-growing American-blend segment. Camel and Winston rank among the top-ten international cigarette brands and Salem is the world's leading menthol cigarette. Reynolds International also has a strong and growing portfolio of regional and local brands, including Peter I, Monte Carlo, Magna, Export "A", and North Star. Nabisco is one of the world's best-known multinational food companies, making and marketing a wide range of biscuits, snacks and premium grocery products. Leading brands include Oreo, Chips Ahoy! and Ritz, as well as domestic household favorites such as Planters, SnackWell's and Life Savers. Internationally, Nabisco has strong brands and market positions in Latin America and Canada, and a growing presence in Asia. Louis V. Gerstner, Jr.
Louis V. Gerstner, Jr. was chairman of the board of IBM Corporation from April 1993 until his retirement in December 2002. He served as chief executive officer of IBM from 1993 until March 2002. In January 2003 he assumed the position of chairman of The Carlyle Group, a global private equity firm located in Washington, DC. Prior to joining IBM, Mr. Gerstner served for four years as chairman and chief executive officer of RJR Nabisco, Inc. This was preceded by an 11-year career at American Express Company, where he was president of the parent company and chairman and CEO of its largest subsidiary, American Express Travel Related Services Company. Prior to that, Mr. Gerstner was a director of the management consulting firm of McKinsey & Co., Inc., which he joined in 1965.