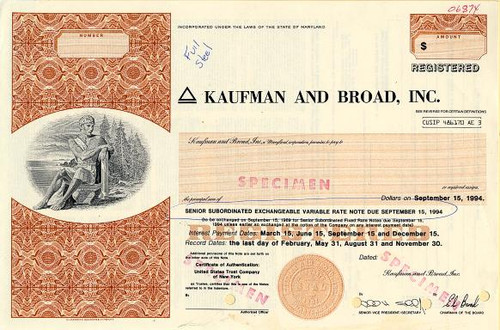 Beautiful engraved specimen certificate from the Kaufman and Broad printed in 1987. This historic document was printed by Jeffries Bank Note Company and has an ornate border around it with a vignette of an allegorical man. This item has the printed signatures of the Company's Chairman, Eli Broad and is over 20 years old. The certificate came from the printers archives and has a note on it regarding "Full Steel" describing the type of engraving. Also, the type of bond was circled. This the only specimen we have from this company. 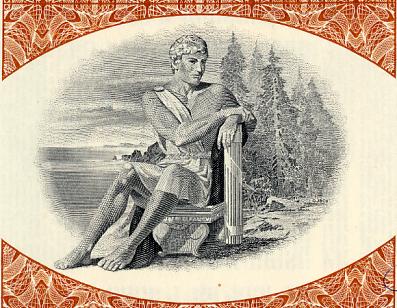 Certificate Vignette
Kaufman and Broad Building Co. was founded in Detroit in 1957 by Eli Broad and Donald Kaufman. Broad, an accountant, parlayed an initial $25,000 investment into sales of $250,000 on the first weekend of business. By the end of its first year, Kaufman and Broad were posting revenues of $1.7 million. The company expanded rapidly and went public in 1961. A year later it was the first homebuilder to be listed on the New York Stock Exchange. It moved into California in 1963. Through acquisitions, it rapidly became a top US homebuilder, expanding into New York, San Francisco, and Chicago. In 1965 it formed a mortgage subsidiary to arrange loans for its customers. In the early 1970s the firm entered Europe and Canada. Sales passed the $100 million mark in 1971 and the company diversified, buying Sun Life Insurance. Housing operations were renamed Kaufman and Broad Development Group (KBDG). In 1980 the flamboyant Bruce Karatz, who had joined the firm in 1972, was appointed president. Karatz steered the company through the recession of the early 1980s, focusing on California, France, and Canada. KBDG acquired Bati-Service, a major French developer of affordable homes, in 1985. The company was renamed Kaufman and Broad Home Corporation in 1986. In 1989 it reorganized into two separate billion-dollar companies: Broad Inc. (now SunAmerica), an insurance firm with Eli Broad as its chairman and CEO, and Kaufman and Broad Home, with Karatz as CEO (and later chairman), which was spun off to shareholders in 1989. When the California real estate market crashed in 1990, earnings plummeted. Karatz diversified by buying up strong regional builders. Kaufman and Broad entered Arizona, Colorado, and Nevada in 1993 and Utah in 1994. Profits dropped in 1995 and 1996 because of weakness in the California and Paris markets and the company's winding down of Canadian operations. But expansion continued, including the acquisition of Rayco, a Texas builder, in 1996. Borrowing from the methods of Rayco, Kaufman and Broad began surveying home buyers for suggestions to incorporate into new designs. In 1998 the company began to build its New Home Showrooms; there are now 14, with another under construction. The corporation continued its expansion drive in 1998 when it paid about $165 million for Dover/Ideal, PrideMark, and Estes, privately held builders based in Houston, Denver, and Tucson, respectively. Kaufman and Broad in 1999 bought Lewis Homes, a major California builder and the #1 builder in Las Vegas, for about $545 million. The company raised $117 million in 2000 by taking half of its French subsidiary public, but retained a controlling interest. Also the company formed a joint venture -- American CityVista -- with former Department of Housing and Urban Development secretary Henry Cisneros to develop homes in inner-city communities. In 2001, the company changed its name again, shortening it to KB Home. Later that year it expanded into the northern Florida market by buying Jacksonville-based Trademark Home Builders. KB Home is one of America's largest homebuilders with domestic operating divisions in some of the fastest-growing areas of the country including California, Arizona, Nevada, New Mexico, Colorado, Texas and Florida. Kaufman & Broad S.A., the Company's majority-owned subsidiary, is one of the largest homebuilders in France. In fiscal 2000, the Company delivered homes to 22,847 families in the United States and France. It also operates a full-service mortgage company for the convenience of its buyers. Founded in 1957, KB Home is a Fortune 500 company listed on the New York Stock Exchange under the ticker symbol "KBH." History from Wikipeida and OldCompanyResearch.com. About Specimens Specimen Certificates are actual certificates that have never been issued. They were usually kept by the printers in their permanent archives as their only example of a particular certificate. Sometimes you will see a hand stamp on the certificate that says "Do not remove from file". Specimens were also used to show prospective clients different types of certificate designs that were available. Specimen certificates are usually much scarcer than issued certificates. In fact, many times they are the only way to get a certificate for a particular company because the issued certificates were redeemed and destroyed. In a few instances, Specimen certificates we made for a company but were never used because a different design was chosen by the company. These certificates are normally stamped "Specimen" or they have small holes spelling the word specimen. Most of the time they don't have a serial number, or they have a serial number of 00000. This is an exciting sector of the hobby that grown in popularity over the past several years.