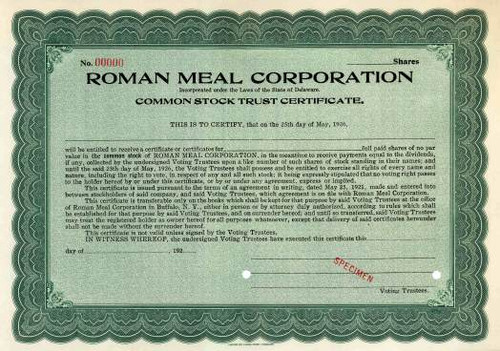 Beautifully engraved SPECIMEN certificate from the Roman Meal Corporation. This historic document was printed by the American Banknote Company in 1926 and has an ornate border around it. This is the first time we have seen this certificate. Roman Meal History The Roman Meal Company is known for the fine bread products sold under the company's brand. The company is owned by the Matthaei family. When the Kansas City bakery merged with other bakeries, William struck out on his own. He bought a small bakery in Tacoma, Washington, and with its success, built a large new bakery. Because of the fine quality of its products, it became the dominant bakery in Southwest Washington. Around 1910, an ailing physician named Robert Jackson moved from Victoria, British Columbia, to Tacoma to seek medical care. An avid historian, Dr. Jackson was fascinated with accounts of the legions of ancient Rome. On a daily ration of two pounds of wheat or rye, these foot soldiers had the strength and stamina to conquer the then-known world! So, the good doctor decided to follow the example of these early empire builders. He would attempt to improve his health in much the same way we still do today -- by modifying his diet and conditioning his body. Based on the early diet of the Roman legionnaires, he developed Dr. Jackson's Roman Health Meal. It was a breakfast mush of whole grain wheat, rye, bran, and flaxseed, which he also used to make pancakes, muffins, and bread. Not only did it correct his vitamin and mineral deficiency, but the cereal provided an effective prescription for many of the doctor's patients. The demand became so great, Dr. Jackson set up a small factory in Tacoma just to keep up. In 1927, William Matthaei purchased the Roman Meal Company from Dr. Jackson, keeping its headquarters in Tacoma, Washington. Combining his baking skills with Dr. Jackson's formulation, William Matthaei developed Roman Meal bread with its outstanding quality. Since then, the trademark has become familiar to people across the nation and in foreign countries. Today, the company is still owned and run by the Matthaei family, who are actively involved in ensuring that Roman Meal products maintain the highest standards of quality and nutrition. Consumer appreciation of Roman Meal's strong commitment to family health and well-being has allowed us to retain our family-owned business and our tradition of quality for almost 100 years. About Specimens Specimen Certificates are actual certificates that have never been issued. They were usually kept by the printers in their permanent archives as their only example of a particular certificate. Sometimes you will see a hand stamp on the certificate that says "Do not remove from file". Specimens were also used to show prospective clients different types of certificate designs that were available. Specimen certificates are usually much scarcer than issued certificates. In fact, many times they are the only way to get a certificate for a particular company because the issued certificates were redeemed and destroyed. In a few instances, Specimen certificates we made for a company but were never used because a different design was chosen by the company. These certificates are normally stamped "Specimen" or they have small holes spelling the word specimen. Most of the time they don't have a serial number, or they have a serial number of 00000. This is an exciting sector of the hobby that grown in popularity and realized nice appreciation in value over the past several years.