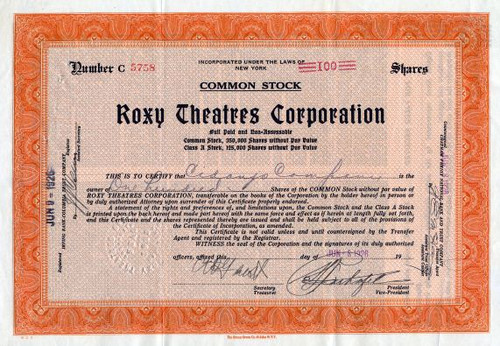 Beautiful certificate from the Roxy Theatres Corporation issued in 1926. This historic document was printed by the Broun Green Company in a brilliant orange background and has an ornate border around it with the company's name on top center. This item has the signatures of the Company's President, Samuel L. Rothafel, aka "Roxy", and Secretary, and is over 83 years old. The certificate was issued to the Cidanjo Companies.

Certificate Vignette
Samuel Lionel "Roxy" Rothafel (9 July 1882, Stillwater, Minnesota - 13 January 1936, New York City) was a showman of the 1920s silent film era and the impresario for many of the great New York movie palaces that he managed such as the Strand, Rialto, Rivoli, Capitol, and his eponymous Roxy Theatre in New York City (opened March 11, 1927, demolished October 1960). He also opened Radio City Music Hall in 1932, which featured the precision dance troupe, the "Roxyettes", later renamed the Rockettes. Rothafel has been credited with many movie presentation innovations, including synchronizing orchestral music to movies (in the silent film era) and having multiple projectors to effect seamless reel changes. The book The Best Remaining Seats by Ben Hall (1961), gives a good overview of the movie palaces of the 1920s and, specifically, of Roxy himself. The Roxy Theatre in New York City was a 5,920 seat movie theater at 153 West 50th Street between 6th and 7th Avenues. It opened on March 11, 1927 with the silent film The Love of Sunya, produced by and starring Gloria Swanson. The huge movie palace was a leading Broadway film showcase through the 1950s and was also noted for its lavish stage shows. It closed and was demolished in 1960. The Roxy Theatre was conceived by film producer Herbert Lubin in mid-1925 as the world's largest and finest motion picture palace. To realize his dream, he brought in the successful and innovative theater operator Samuel L. Rothafel, aka "Roxy", to bring it to fruition, enticing him with a large salary, percentage of the profits, stock options and offering to name the theatre after him. It was to be the first of six planned Roxy Theatres in the New York area. Roxy determined to make his theater the summit of his career and in it realize all of his theatrical design and production ideas. He worked with Chicago architect Walter W. Ahlschlager and decorator Harold Rambusch of Rambusch Decorating Company on every aspect of the theatre's design and furnishings. Ahlschlager succeeded in an efficient plan for the irregular plot of land, which utilized every bit of space, and featured a diagonal auditorium plan with the stage in one corner of the lot. The design maximized the theater's size and seating capacity but compromised the function of its triangular stage. Roxy's lavish ideas and his many changes ran up costs dramatically. Shortly after the theater's opening, Lubin, who was $2.5 million over budget and near bankruptcy, sold his controlling interest a week before the theater opened to movie mogul and theater owner William Fox for $5 million. The final cost of the theater was $12 million. With Lubin's exit, Roxy's dreams of his own theater circuit also ended. Only one of the projected Roxy chain was built, the planned Roxy Midway Theatre on Broadway on the Upper West Side of Manhattan, also designed by Ahlschlager. The nearly complete theater was sold to Warner Brothers who opened it as Warner's Beacon in 1929. History from Wikipedia and OldCompany.com (old stock certificate research service).

Postcard of Long Horns of the Ole Southwest