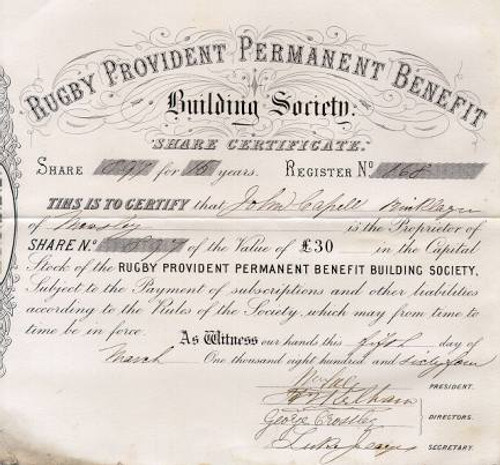 Beautifully engraved certificate from the Rugby Provident Permanent Benefit Building Society issued in 1864. This historic document has an ornate border around it. This item is hand signed by the company's president, directors, and secretary and is over 137 years old. The Rugby Provident Building Society which was established in 1861. In 1983, the company merged with the Hinckley Permanent Building Society (which was founded in 1865). A top 30 society, it is one of the fastest growing in the U.K., with total assets exceeding £400 million and over 80,000 investors. In addition, it has over 9,000 borrowers who are also benefiting from the Society's growth and success. A series of introductory and loyalty discounts reward the decision to choose the Hinckley and Rugby by making the cost of borrowing as low as possible. With 13 branches and 13 agencies, Hinckley and Rugby is not only represented in many of the larger towns and cities of the East Midlands, but it is also strongly committed to having outlets in smaller village communities, where it is often the only financial services provider for miles around.