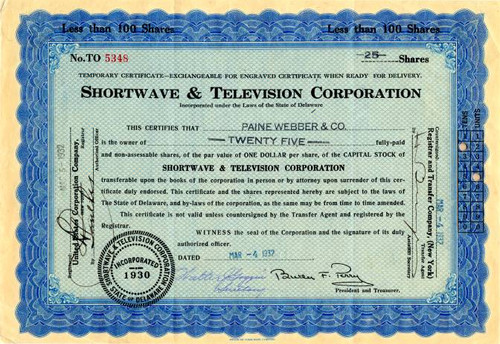 Beautiful certificate from the Shortwave & Television Corporation Company printed in 1932. This historic document was printed by the American Bank Note Company and has an ornate border around it with the company header. This item has the printed signatures of the Company's President, Butler Perry and Treasurer, and is over 79 years old.

Certificate corporate seal and signatures
W1WX is Boston's second television station (the first being W1XAY). This station started up in April of 1929, and was owned by Shortwave and Television Corporation, Inc., (which was founded in 1930) by A.M. "Vic" Morgan, Hollis Baird, and Butler Perry). The station started off broadcasting on 2120 kHz , alternating between 48 and 60 vertical lines and 15 frames per second. In 1930, it moved over to 2.1-2.2 kHz and broadcast at 48 lines only, still at 15 frames per second. In 1934, the station switched back to 60 frames per second only, running at 20 frames per second until it shut down in 1934. Timeline April, 1929: Station is founded as W1WX by Shortwave and Television, broadcasting two times a day at 100 watts power, until December. September 30, 1929: W1XAV Boston is listed in the Radio Service Bulletin at 2.1-2.2 MHz, with 500 Watts of ERP. December, 1930: station call-sign is changed to W1XAV. January, 1930: W1XAV Boston officially goes on air. late March, 1930: W1XAY (Lexington, Massachusetts), leaving W1XAV temporarily as the only mechanical TV station in Boston. December 7, 1930: W1XAV Boston broadcasts a video portion of a CBS Radio program, The Fox Trappers orchestra program, sponsored by I. J. Fox Furriers. Included was what is sometimes called the first television commercial, which was prohibited by FRC regulations, however, other experimental television stations such as W1XAY may have done so before W1XAV signed on the air. Regardless, the FRC advised against this, since there was no agreement on whether experimental stations could air commercials, or network programming. March 8, 1934: Baird, Perry, and Morgan had all moved to General Television Corp, which they acquire the same day. June 27, 1934: W1XAV goes off the air. The FCC told Shortwave and Television Laboratory that the world didn't need two mechanical TV stations. One license was accepted, the other was denied, effective July 13, 1934. By now, Shortwave and Television changed its name to General Television Corporation. and switched from a mechanical to an electronic system. January 1, 1935: General Television Corp is officially dissolved. The company was officially dissolved on January 1, 1935, but by that time it existed only on paper, since , which they acquired on March 8, 1934. History from Wikipeida and OldCompanyResearch.com.