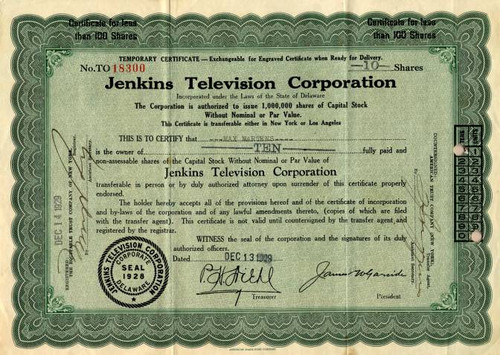 Beautiful certificate from the Jenkins Television Corporation Company issued in 1929. This historic document was printed by the American Bank Note Company and has an ornate border around it with a vignette of the comapny name. This item has the printed signatures of the Company's President, and Treasurer, and is over 84 years old.

Certificate Vignette
Charles Francis Jenkins (August 22, 1867 June 6, 1934) was an American pioneer of early cinema and one of the inventors of television, though he used mechanical rather than electronic technologies. His businesses included Charles Jenkins Laboratories and Jenkins Television Corporation (the corporation being founded in 1928, the year the Laboratories were granted the first commercial television license in the United States). Over 400 patents were issued to Jenkins, many for his inventions related to motion pictures and television . Jenkins was born in Dayton, Ohio, grew up near Richmond, Indiana, where he went to school, and went to Washington, D.C. in 1890, where he worked as a stenographer. History from Encyberpedia and OldCompany.com (old stock certificate research service)