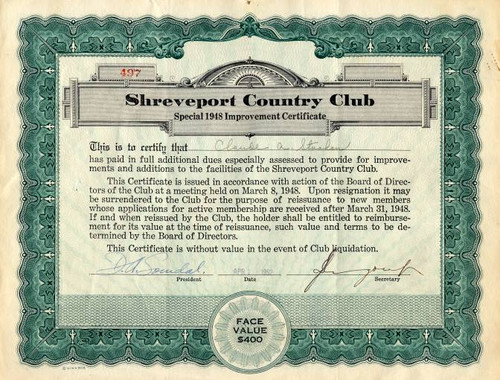 Beautiful certificate from the Shrevenport Country Club issued in 1952. This historic document was printed by the Goes Company and has an ornate border around it with a vignette of the company name. This item has the original signatures of the Company's President, Dewey A. Somdal and Secretary, and is over 61 years old.

Certificate Vignette
The Shreveport Country Club, while formally established in the year 1909, actually traces its roots back to 1900 when a group of golf enthusiasts first brought the game to the Shreveport area. Golf was then in its infancy in the United States: A fad newly imported from the British Isles. The young enthusiasts of this new fad, however, were sowing the seeds of a serious sport and planting the roots of what was to become one of the South's first and finest Country Clubs. Of course, they had no idea of this at the time -- they just wanted to play golf. And so, on a sunny summer's day in the year 1900 four young men set out for a pasture in Allendale, just off Pierre Avenue near Milam Street, close to the old Ball Park. There, being careful to avoid cows and houses, they played their rough version of the game. As John McWilliams Ford, then a young cotton buyer, recalled almost six decades later: "We called it a golf course, but there wasn't much there except some sand greens and a lot of rocks and rough spots... Ford, one of the four friends who ventured out to play golf that day, would later become a Caddo Parish Police Juror (Commissioner), a State Legislator, City Councilman, City Finance Commissioner, and Mayor. Ford Park, near Cross Lake, is named for him. Another of the four was a young lawyer naJned Edwin P. Mills, later to become a Judge of the Caddo District Court. Mills played with handmade wooden clubs which did not match and a ball "with all the bounce of a block of wood." As "The Shreveport Times" stated in a 1959 story on the birth of golf in Shreveport: "No one in this part of the country had seen a golf stick before. Certainly practically nobody knew how to play." As Ford stated, "Ed and I knew a little about it, and we taught the rest." Eventually a group of five English cotton buyers joined the original foursome. The Englishmen, living temporarily in Shreveport, were associates of Ford. They were more familiar with the game and thus added a bit of seriousness to the nascent club. The group decided to call themselves The Pelican Golf Club in 1901. DEWEY SOMDAL (1898-1973) -Dewey Somdal was an architect with the well-known Shreveport;firm, Neild & Somdal, and one of founding directors of Historic Preservation of Shreveport History from Wikipedia and OldCompany.com (old stock certificate research service)