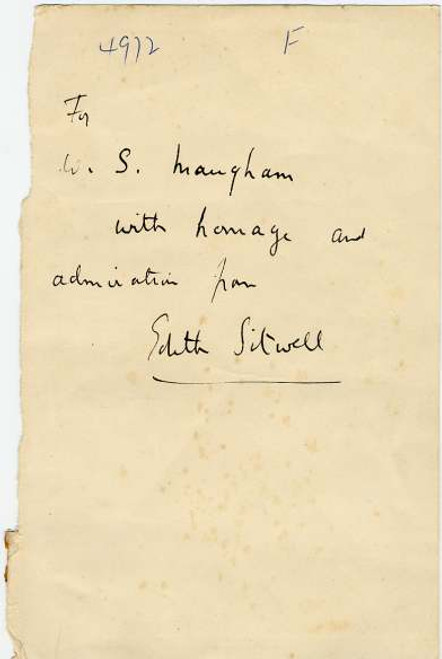 Signed Note from Edith Sitwell. For W.S. Mangham With homage and admiration from Edith Sitwell Dame Edith Sitwell 1887-1964 English poet, critic, and biographer, Sitwell was most successful as a writer of satirical verse or burlesque. She was born in Scarborough, Yorkshire, and educated privately. She and her brothers Osbert and Scheverell were likely the most famous literary family of their time. Sitwell both shocked and amused people by her writing, eccentric behavior, and dramatic Elizabethan dress. Her poetry is notable for its avoidance of outmoded metaphor and imagery, its technical dexterity, especially in the use of dance rhythms, and its ability ot communicate sensation and emotion. During World War II (1939-1945), Sitwell wrote poems about the blitz and other war issues, such as "Still Falls the Rain," which describes a London air raid. In 1954 she was made a Dame Commander of the Order of the British Empire (13).