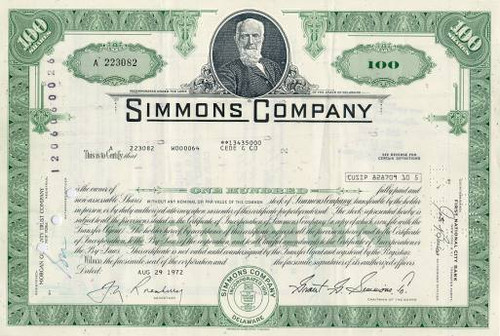 Beautifully engraved Certificate from the famous Simmons Bed Company issued no later than 1972. This historic document was printed by the American Banknote Company and has an ornate border around it with a vignette of Zalmon G. Simmons , the company founder. This item has the printed signature of Grant Simmons, Jr and is over 34 years old. Kenosha, Wisconsin, was just a tiny town nestled on the shores of Lake Michigan when Zalmon G. Simmons built his first factory there in 1870. With the help of nine employees, Simmons manufactured cheese boxes. In 1876, he made a decision that would change his company -- and an entire industry -- forever. He began mass-producing woven wire mattresses. Prior to Simmons' foray into bedding, only the wealthy could afford bedsprings. The average working man suffered nightly on straw, cotton, or horsehair pads resting on thick rope or unyielding wooden slats. Simmons' innovative manufacturing process dropped the price of a woven wire mattress from $12 down to 95 cents, enabling everyone to sleep much more comfortably. In 1925 Zalmon G. Simmons II followed his father's pioneering spirit with the development of the unique independent Pocketed CoilTM technology that formed the basis of the premium-quality Beautyrest®. The independent Pocketed Coil™ springs contoured and supported the body perfectly. Before the company started production of Beautyrest®, mattresses with individual coils could only be found on luxury liners such as the Titanic. Further Advances in Sleep Technology Also in 1925, Simmons commissioned a six-year study on the mysterious state of sleep. Eleven years later, the company's pioneering research formed the basis for modern-day sleep technology. Simmons introduced its innovative Hide-A-Bed® sofas in 1940, before answering America's need for military manufacturing the next year. Simmons made 2,700 different items for the War from parachutes to bazooka rockets. When the soldiers returned home in the mid-1940s, many moved back into their parent's houses taking advantage of the new Hide-A-Beds®. Noting a study that showed Americans were growing broader and taller, Simmons became the first mattress company to introduce a Super Size mattress in 1958. By 1960, Simmons was advertising for its new King- and Queen-Size mattresses in Life magazine and other national publications. Preparations for the Future Zenon Nie was appointed Chairman of the Board and Chief Executive Officer in 1993, promoting quality products and immediate accessibility. That same year, Simmons introduced its Advanced Beautyrest® Coil, providing more mattress with the tallest coil height in the industry. Simmons' commitment to the health and wellness of consumers was strengthened in 1995 with the launch of Backcare®. Backcare® mattresses are designed to help the sleeper maintain proper spinal alignment by providing the sleeper with the proper support and comfort in all five zones of the body. The same year, Simmons launched "The Bowling Ball Mattress™" ads to dramatically illustrate how the movement of another person on the mattress is less likely to disturb your sleep on a Beautyrest®. The ads show a person dropping a bowling ball on a Beautyrest® mattress supporting upright bowling pins. The pins are left standing. A local news channel duplicated the testing for a consumer reports special. Sure enough, not a single pin fell. With corporate headquarters in Atlanta, 1996 was an exciting year for Simmons, the official bedding supplier to the 1996 Centennial Summer Olympics. It was actually the company's second Olympic experience, as they were also a sponsor of the 1980 Winter Games in Lake Placid, N.Y. Over a century of informative and entertaining ad campaigns have lead to the development of an innovative ad campaign for Backcare®. The 5 Zones For Your Bones television commercial uses state-of-the-art computer animation to communicate the unique benefits this product offers. Today, Simmons continues its push for Better Sleep Through Science™. It has become the first mattress company to use laser technology to measure motion -- and the first to build a presence on the Internet.